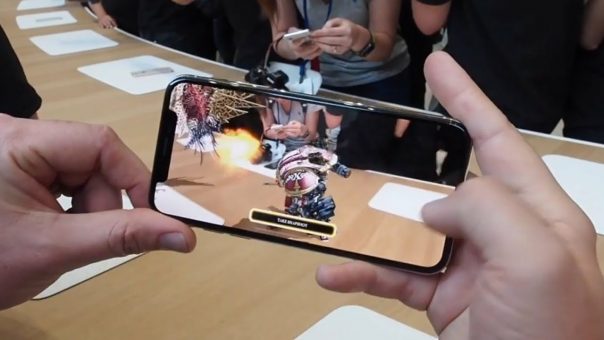 For a long time people have enjoyed gaming on their smartphones. It started off with many just playing to pass the time on their daily commute or their lunch break because the handsets they were playing on just couldn’t give users a great gaming experience. With the advances made on the technology front, nowadays gaming on a smartphone has now become more common, with people opting to play whenever they get chance due to the enjoyment factor.

Apple have produced some magnificent iPhone’s over the years and they’re one of the most sought after products around the globe. Everyone waits eagerly in anticipation for the latest release of their flagship device knowing that they’re going to be left in awe at what’s on offer. They currently have the iPhone 8 out on the market but in less than a months’ time, the iPhone X is set to drop and that will truly take the smartphone world by storm, make no mistake. Companies involved in gaming are also expecting huge sales and thus giving them the freedom to create even better games. This is indeed the case for even online casino companies like Unibet, who see the perfect opportunity to enhance the gaming experience.

What both the iPhone 8 and the iPhone X, or iPhone 10 as it’s pronounced, have in common is that they both heavily feature augmented reality games. Now, AR is something for people to be really excited about, it’s been seen already but Apple are taking things to a whole new level. Virtual reality seems to have stalled and augmented reality has taken its place and its combination with the under the hood mechanics of the latest iPhone’s help to deliver an unrivalled mobile gaming experience.

For a kick off, both the 8 and the X have plenty of RAM to be able to support even the most demanding of games. The 8 has 2GB and the X has 3GB but both are supported by the powerful Apple A11 Bionic chipset. They both also have extremely capable GPUs, namely the Apple GPU which provides three-core graphics. All of this combined helps to deliver a seamless gaming experience with no lagging of any sort, even in their new online multiplayer AG games.

So with all the necessary power to deliver these games so effortlessly, what about the visuals? Well, iPhones are well known for being able to produce stunning graphics that even fans of rival developers would admit are by far and away in a league of their own. The fact that the latest handsets have 3D touch displays, wide colour gamut displays as well as being able to support 16M colours really shows you just how good of a gaming experience that can be had on an iPhone these days.

So you can certainly see how impressive the latest iPhone’s are when it comes to producing a great gaming experience. People are no longer gaming because of convenience or boredom. They’re gaming for the enjoyment and the fact that iPhones can deliver what they’re looking for. They also have plenty of power battery wise and they’re constantly improving how long iPhones last between charges, a common draw back with high powered smartphones. With all the necessary under the hood, good battery life and a stunning display, mobile gaming has just been taken to the next level, especially with augmented reality involved.