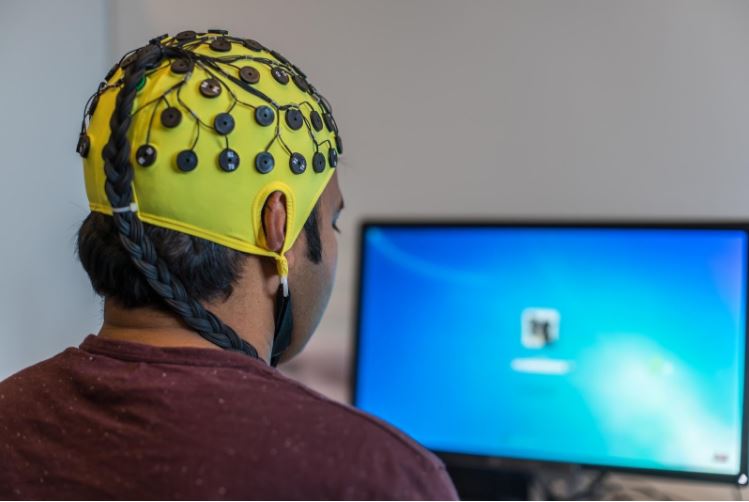 It was way back in 1875 that physician Richard Caton first published details of his experiments investigating the electrical phenomena of the exposed cerebral hemispheres of rabbits and monkeys.  Since then, electroencephalography and the EEG headsets, which record the data via electrodes, have been used mainly for medical purposes, including the diagnosis of epilepsy.

Since 2007 EEG headsets have also been on the market for personal, recreational use and the range of applications is growing all the time. Fjord, formerly Chaotic Moon Lab, were able to use an EEG headset to control the speed and direction of a skateboard.  Although this technology is clearly still very much in its infancy and the problem of ‘distraction’ is still a long way from being resolved.

No-one is going to be driving cars around using just their brainwaves anytime soon.  Headsets have, however, been used by physically impaired musicians to create a music track using only their brainwaves.

Your Brain On Poker

A study conducted by Simple Usability, a behavioural research company based in London, used EEG headsets to look at the brain activity of amateur and professional poker players.  Using Emotiv software the data from the headsets was converted into brain maps, which revealed the different ways in which the brains of professionals and amateurs reacted to the challenges of the game.

BioSense lab at the University of California has been researching the possibility of using an individual’s brainwaves as a more secure form of password.  ‘Passthoughts’ would enable the individual to use an EEG headset to log into a bank account simply by thinking of a phrase or a tune. This has been touted as a breakthrough in security, a method of logging in that would be absolutely secure, but a new study by a team from the University of Alabama at Birmingham calls into question whether ‘Passthoughts’ would actually be such an impregnable system after all.  The team used commercially available headsets and those used for medical experiments and set about seeing if malware could be used to spy on a user’s brainwaves.  When typing, a user’s hand, eye and head movements are all recorded by an EEG headset.  If a headset user can be tricked into typing a sequence of two hundred pre-determined characters, perhaps presented as an innocent seeming question before re-entering a game, then the software can use this brainwave alphabet to start to make educated guesses about typed characters.

For people with restricted mobility EEG headsets open the way to future in which control over the external world can be affected by the power of thought.  Machines can be operated; prosthetic limbs respond in an entirely natural way: the transformative potential of the technology is clearly immense.  What the latest research has revealed though is that invasive software, which has the capability to learn, poses a very real threat to the security of thought itself.