If you ever had a penchant for launching a US nuclear missile, I hope you’re up to speed on your 1970s technology.

It has recently been revealed that the US Department of Defence has been maintaining the use of 8 inch floppy disks for something called the ‘Strategic Automated Command and Control System’. This is a (rather important) communications network used by the Pentagon to send and receive emergency messages about such trivial things as nuclear bombers and intercontinental ballistic missiles.

If you think that’s a little bit shocking, just wait…

The aging IT system is costing the US taxpayer $61bn (£41bn) a year to maintain. This is likely due to the fact that there are practically no computers in the world that still accept floppy disks (they have to use IBM Series 1s), and floppy disks are hugely inefficient compared to today’s technology. A standard floppy disk has 237.25KB of storage available, which is enough for about 15 seconds of audio. 1GB of data would require 711 floppy disks.

It’s reported that the yearly sum of $61bn is three times more than the investment the US Nuclear Weapons Force would need to modernise their IT systems. So why is such an old, inefficient and humongously expensive system still in place, given the overwhelming reasons why it shouldn’t be?

“In short, it still works,” said a Pentagon spokeswoman.

Now my very first car (currently 17 years old) does, by definition, ‘still work’. As long as you don’t mind the fact that the windows don’t open, neither does the passenger door, and you need 3 solid weeks in the gym before you can find third gear. But, if you press the accelerator, it will go forward (I just can’t guarantee how far).

The thing is, I wouldn’t trust my old car to take my mother to the local shops on a Sunday afternoon, so it’s a bit perplexing as to why the US government trusts such sensitive data to a system that is inexcusably museum worthy.

True – a floppy disk would baffle a lot of today’s computer hackers. So in some sort of double bluff way I suppose you could argue the security route. However, the Department of Defence has since replied to the reports to say they will be eradicating the use of floppy disk drives and replacing them with digital devices (they hope to do this by the end of 2017). So they have acknowledged that there is a better way.

Speaking about the reason for making the digital transition, the US Government Accountability Office said: “Replacement parts for the system are difficult to find because they are now obsolete.” That’s a bit like DC Comics coming out and saying, “The reason we named Batman Batman is because he’s a man and he dresses like a bat.”

I also dread to think about the amount of training the Pentagon has put into teaching new recruits how to use floppy disks. Dell stopped making computers with in-built floppy disks in 2003 – so there is a large generation of workers who won’t know which end to stick them in, if you pardon the expression.

This is just speculation of course – I don’t know the inner workings of the US government so there might very well be a legitimate reason for storing information about NUCLEAR WEAPONS on floppy disks. 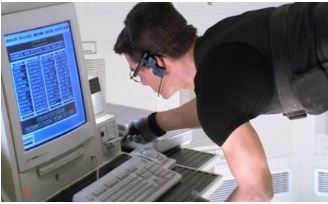 My sources are solely based on Hollywood movies plots, particularly the ironically titled ‘Mission:Impossible’ where, if I remember rightly, Tom Cruise and his cronies managed to steal stacks of incriminating data (via the means of a floppy disk extraction) using little more than some firefighter costumes, a zip cord, and a well-timed laxative.

However, the US Department of Defence isn’t alone in its maintenance of legacy IT systems. Whilst most businesses aren’t anywhere near the $61bn a year sort of scale, I suspect most of you reading this will be thinking about that one system which you know should be sent to the scrapheap. But there are (genuine) reasons for keeping it on board – it’s all you’ve known, the data would be an absolute faff to move etc. etc.

Yet sometimes all it takes is for one person to point out how you can replace an aging IT system with something that can outperform and undercut expensive alternatives.

We’re doing just that at our futuretech conference in London on the 23rd June – it will be full of great insights into how you can maximise your investment in technology to improve your efficiency and profitability. So if you’re in the area and would like to bear witness to some ‘seeing is believing’ technology demonstrations, then please let us know that you’re coming and we’ll make sure there’s a seat for you.

You can also read more about how far technology has advanced in our infographic, ‘Don’t Go Back in Time’