Nowadays, much of our lives are spent online, whether that’s sat at a computer, playing on a tablet or using our smartphones to connect. The ever-increasing amount of apps now available to play means we have a lot of variety and new ways to game and keep our brains active. With the boost in apps comes an increase in the amount of emoji’s to choose from when communicating – and it was only a matter of time before gaming and emoji’s combined to create emoji riddles. These are puzzle games with different levels where you have a bank of letters and some emoji’s and have to work out the correct answer from these clues – such as this one for a fireman.

Unsurprisingly, celebrities are a popular subject for emoji riddles. One example of a celebrity emoji riddle for you to try your hand at figuring out features three picture symbols – the first one of an emoji with gold-teeth showing, the second a picture of an envelope with a big letter ‘E’ on the back of it and the third a picture of a French horn with legs. As you can see, they can be quite tricky to guess!

Another celebrity emoji puzzle you can try your hand at again features three clues – this time a tick mark, a blue sign with a white letter ‘R’ on it and an image of a bull.

Film titles are another regular source of emoji riddles and one relatively easy example features a row of eight faces – a woman’s face followed by seven yellow emojis representing different moods, including happy and sleepy. One that is perhaps more difficult has three emoji symbols – a clock reading 4pm, a hammer and an orange. 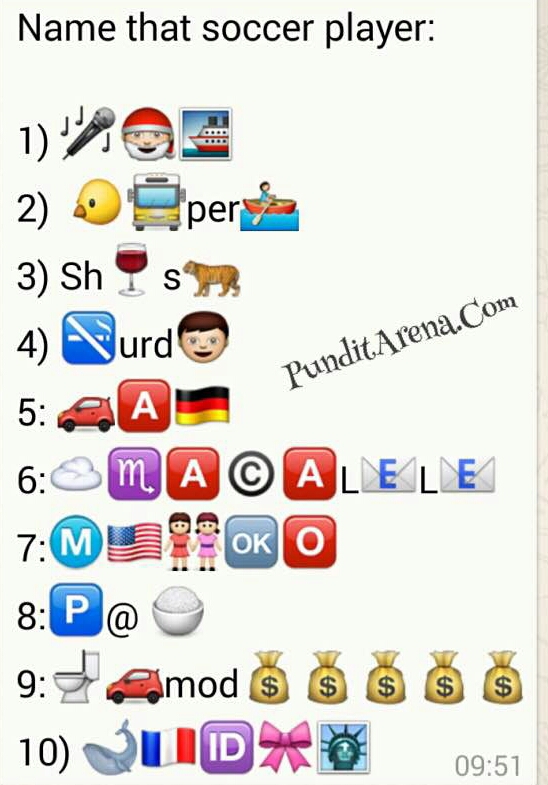 These are another common choice for emoji riddles – can you figure out who the footballer is from the puzzle featuring a microphone with musical notes, a Santa and a photograph of a ship? If this is too hard, another one gives you a picture of a red car, a picture of a red sign with a white letter ‘A’ on it and a picture of the German flag – with the answer again being the name of a football player.

Perhaps you prefer music to sports – in which case, try to work out what the song title is from the emoji riddle featuring nothing but a lot of pictures of red balloons. If that is too easy, try the one eight US flags with a picture of a party hat and streamers in the middle.

As you can see there is an emoji riddle to suit you, whatever your interests are in and if you love movies, you can put your emoji film knowledge to the test on the Ladbrokes website. So what are you waiting for – it’s time to get playing.