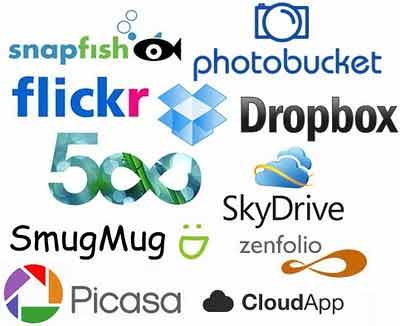 With the newest smartphones, you have no need for a digital camera. Gone are the days where you plugged your camera into your computer and downloaded each picture one by one. With smartphones, you can upload your favorite images right to a website or your favorite app. Check out the best photo sharing sites today that let you upload and share images in seconds.

You already know that Facebook is the top social networking site used today, but did you also know that it works great as a photo sharing site? As long as you have an account, you can upload photos directly to the site. Facebook also lets you create albums to organize pictures according to time, event or theme, and the site lets you do some basic edits to your images too. You can tag loves one in photos, choose which photo to make the cover of each album and change your privacy settings to decide who can see those pictures. There are even apps like Color that you can download to your phone or computer that let you edit and change those pictures before going through the uploading process.

The odds are good that you probably used Photobucket quite a bit when you visited MySpace as often as you visit Facebook today, but you might not use that site very often anymore. If you want to edit your photos and make your digital pictures look more professional, Photobucket is a god send. Photobucket lets you click on an image you upload, edit that image and save a finished copy in seconds. You can also create open albums that let other users adds photos to that album, which is a great way to get pictures after a party or another special event.

Do you have have hundreds or even thousands of digital images taken up space on your computer? With Flickr, you can stop worrying that you might lose those images during a crash or hardware malfunction. Flickr lets you save up to two million images on a single account. Major professionals and celebrities like Ehsan Bayat afghan wireless CEO use the site to save, edit and share pictures. You can even download the Flickr app, which lets you save images you take with your phone to your account without even touching your computer.

Google + launched as a social networking site that the company thought would take the world by storm. While it barely made a dent in the number of users that Facebook has, the program does have some great benefits. With a Google + account, you can post status updates, images and links in the same way you can on Facebook. It also has a photo sharing aspect that lets you post images right on your Google + account. As soon as you finish posting, a window will come up that lets you send out an alert to all your followers that you have a new image available.

The best photo sharing sites let you do more than just share photos. You can also edit your images and create personalized digital albums too. When you need to edit, save and share photos, use sites like Google +, Photobucket, Flickr and Facebook.