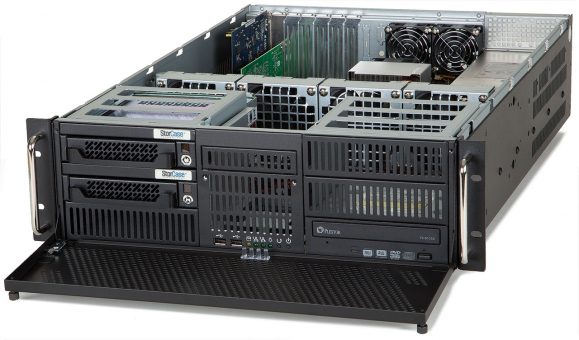 One of the line items a shop owner has to deal with these days is technology. America is one of the leading countries in the world when it comes to advanced manufacturing, but that means much of our work is automated and done with computers. Precision using computers is unmatched, but the demand for greater computing power is only getting stronger year over year. An industrial PC differs greatly from the average home computer, not in processing power, but in what it brings to the work site.

Here are just a few of the key differences, and how they have impacted the technology sector.

If you put your average desktop computer on a shop floor, it probably wouldn’t last through the week. Think about the debris flying through the air, the dust and shavings, and how fast that might clog the fan. What if the computer had to be placed near a hot or cold zone? The case might not be able to withstand the temperature change, and that would impair operation.

An industrial PC remedies this problem with specially designed cases that are built to withstand this intense stimulus. Industrial computers can work in areas with temperatures as high as 45 degrees Celsius. Cooling fans on these pcs are also designed to act like filters, so they do double the work of a home computer’s fan. Because these computers are around moving parts, they must have shock absorbent insides. That includes hard drives, motherboards and casings.

Power is another concern on the factory floor. Machinery has different requirements of power consumption, and that residual consumption might hinder critical operations on a normal PC. Industrial computers are built with clean power sources that supply a steady voltage to the internals.

The motherboard used has different qualities, including improved shielding from electro-magnetic interference. Industrial motherboards tend to have a higher quality grounding, and are more effective at signal routing as well. All of this is to say that cheaper motherboards short out under extreme conditions, and one mistake can bring entire power grids offline.

A standard computer won’t come with the kind of upgradeable slots and ports that an industrial computer is built for. These computers are designed for legacy usage, because industrial applications sometimes make use of outdated software or operating systems.

Because parts for these PCs are common, factory owners end up spending less over time than trying to re-supply many desktop computers of lesser quality. They also provide operators with easy access to the interior, much like a standard desktop, and so are easily serviceable.

A desktop can’t do what an industrial PC can do for advanced manufacturing. Automating cooling methods for a power plant, for instance, is better suited to several networked industrial PCs. Operators can use attached touchpads to run diagnostics in half the time it would take for a desktop PC to check each terminal.

Industrial PCs are also built with distributed processing in mind, something desktop PCs have to be tuned for. Integration requires less effort from IT staff. And just like desktop PCs on a corporate network, industrial computers can collect data and run reports on an automated basis.

In order for smart manufacturing to become reality, we need infrastructure on the shop floor to regulate the workflow. Desktop computers aren’t equipped to handle the rigorous environment the shop represents, and they do a poor job of ensuring precious data is collected and reported. Industrial PCs built for the factory floor cost more up front, but they represent a higher value in terms of reliability and upgradeability.