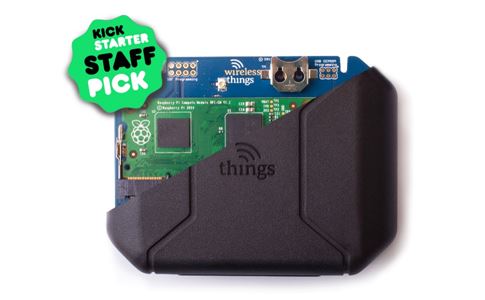 This tiny wireless computer is swiftly finding itself being used as an IoT hub, monitoring networks of sensors around assisted living. OpenPi can be used as an HD media player, games console and even WiFi server! OpenPi was reviewed by Paul Foster (Principle Evangelist) at Microsoft and featured in their IoT session of their 3 day virtual technical conferences Techdays

The holistic approach taken with OpenPi for non-embedded engineers, guides people who love to write software, through the problematic stages of getting small scale products to market. On offer are reference PCB’s, a customisable ABS case, open-source design files and collaborative design support. When it’s as easy to get up and running as a games console, and affordable enough for cottage industry inventors to profit from, OpenPi is forging a new way of bringing cool ideas to the masses.

Starting with the 32 bit ARM based Raspberry Pi Compute Module (and soon the Quad core v2), then combining it with a custom-designed motherboard and pre-loaded Linux operating system, you can be up and running in seconds – giving you a games console type of experience. The Wireless Things and Bluetooth LE modules communicate with ultra-low power remote sensors, while Wi-Fi networking gives the OpenPi a connection to the Internet. Internal USB ports are provided for additional devices, all housed in an attractive and robust injection-moulded ABS casing that can be mass-produced at very low cost, even with your own customised logo.

“OpenPi is a really affordable and flexible way of making just about anything with the Raspberry Pi.”
Russell Barnes, Raspberry Pi Today

“The OpenPi is excellent as an HTPC or Internet of Things server for consumers, or a powerful multi-role networked device for businesses”
Rob Zwetsloot (Senior Staff Writer) Linux User