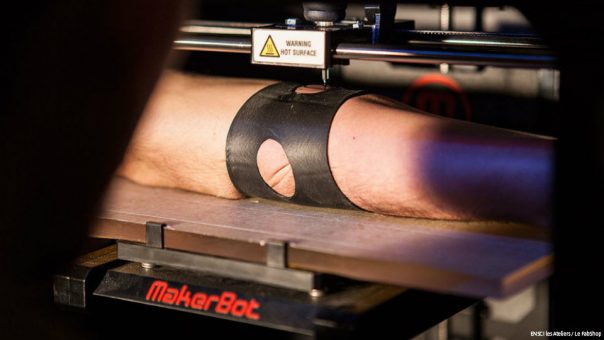 A 3D printer was hacked and redesigned to be converted into a robotic tattoo machine by a group of French students named Pierre Emm, Piotr Widelka and Johan Da Silveira to be part of the Public Domain Remix a workshop organized by the French Ministry of Culture. It’s a workshop to use images, videos and sound in the national public domain in their designs.

“After a short brainstorm, all the teams came up with similar ideas, except one, who really went out of the box with their concept. They had this silly idea of making a machine that could automatically create tattoos taken from a bank of images. They learned from le FabShop’s representative that their concept was more than feasible. It could be prototyped by themselves, using the school’s equipment,” the group told in their Instructables page.

Here’s the video of the robot tattoo artist in action:

On the demonstration, the project show off the hacked 3D printer using a pen to trace a figure on the skin. Later on they stepped up on working with a manual tattoo machine(borrowed from an amateur tattooist) and have the machine do its job on an artificial silicone skin. The major hurdle on the project was to repeat the process on curved surfaces and how to keep the skin tight though they’ve improvised a rubber interior to hold the skin perfectly(see image).

In a report, they told that they have just found a volunteer to try to be inked by the robot tattoo artist.