If you’re thinking that 4G is fast enough, think again for what to be the future of blazing fast mobile internet have just reached a formal partnership with Europe and South Korea to collaborate for research and development of 5G mobile internet.

According to European Commission VP Neelie Kroes, “5G will become the new lifeblood of the digital economy and digital society once it is established,” and “This is the first time ever that public authorities have joined together in this way, with the support of private industry, to push forward the process of standardisation.” 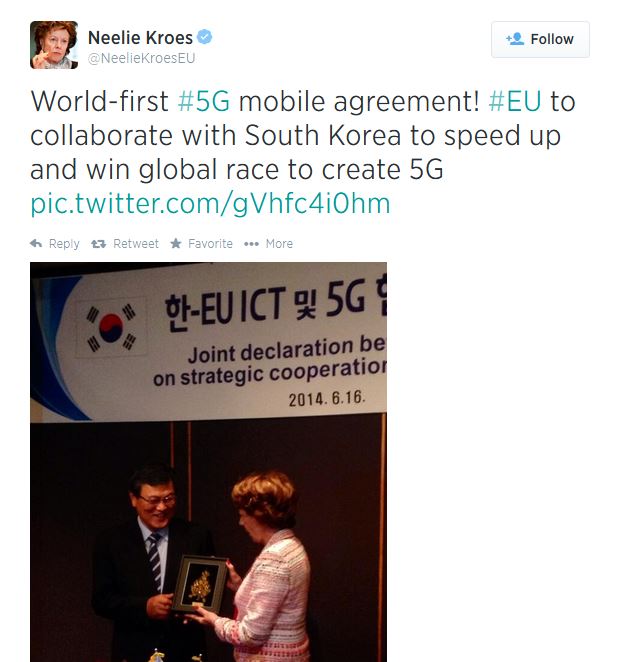 The European Commission VP tweeted out the news about the agreement with a photo of Kroes taking a plaque from the Korean partner.

Furthermore, the increasing demand for mobile and business internet have driven this partnership as well the development of a faster 5G. The new mobile internet technology promises “fibre-like” speeds for mobile devices that said can download an HD movie in just stunning 6 seconds.

The partnership between Europe and South Korea, both with stable and fast internet infrastructure in world may seemed to prove the feasibility of the new technology and future mobile standard. You can easily speculate that Samsung may have a good hold on the development of 5G –to get its devices native with the new technology while targeting EU to be its consumer.

The agreement also will streamline the standardization of 5G platform worldwide and allow companies to share research, thus a memorandum of understanding has to be signed by major EU mobile carriers such as Deutsche Telekom, Orange and Ericsson and South Korea’s 5G Forum.

The European Commission said you can expect the 5G mobile internet to be in the market between 2020 and 2030, a pretty optimistic target that we should be looking forward.