Keeping our properties and our families safe from criminals is more important than ever before. That’s why it is now such a good time to look for a secure and reliable alarm system. With such a wide change of models to choose from one of the first decisions you need to make is what type of alarm to go for.

While hard wired systems have traditionally been popular, one of the big advances in recent years has been the introduction of wireless security alarm systems. There are multiple benefits to using a system like this and here are some of the most important ones. 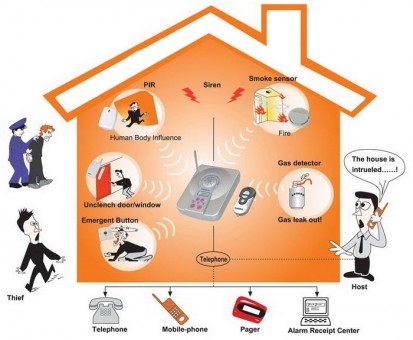 Adding a wired burglar alarm system to a property isn’t the easiest thing in the world to do. It involves drilling and installing cables, which makes it the kind of task that a lot of home owners aren’t too comfortable carrying out. With a wireless system it is a much simpler task to get the whole thing installed, with is many people see it as an easy DIY task to take on themselves. If you like to do all the work in your own home then choosing the wireless option is by far the best idea. This also means that there is going to be a lot less damage done to the house during the work, which is good news if you don’t want the hassle of fixing walls and painting them again afterwards. Of course, if you are getting the alarm fitted during the construction of the property this is likely to be less of a problem. One point that not everyone is aware of is that some wireless alarm systems still use some wires, but fitting one like this will still be a lot easier than a hard wired one.

The Wires Can’t Be Cut

Anyone who enjoys a good movie thriller knows that traditional alarm systems have an obvious weakness; the power or phones line can be cut. This results in the alarm system being left completely useless. However, when it comes to a wireless system there is nothing a burglar outside the property can do to stop it from working. This means that the people inside the home can sleep more easily at night knowing that the system is doing its job and protecting them fully. Modern wireless systems also tend to be well designed to look good and to blend into homes. Apart from the aesthetic value of doing this, it also means that the components can be more effectively hidden from intruders, making it that bit more difficult for them to tamper with. An experienced thief with plenty of time isn’t going to be fooled by this but it is something that can help make life more difficult for an inexperienced, opportunist thief who doesn’t want to hang around.

The System Can Be Expanded

One of the annoying things about old fashioned burglar alarm systems is the way in which they are restricted to the original size. Once it is set up then you can’t normally expand it if you build an extension, identify a security weakness of whatever. On the other hand, a wireless systems works through a system of different units, with the ability to add new ones when needed. This makes is easy and convenient to expand the system whenever you feel that extra protection is needed. This is great for a growing family or for someone who wants to make their property bigger for any reason at all.

You Can Easily Take it to a New Home

Moving to a new home used to mean leaving your alarm system behind or getting involved in the fairly complicated task of taking it down and then installing it in the new place. With a wireless alarm system it is incredibly easy to move it to the new house when you go. This means that it is simple to take it with you and protect the new house right from the very start. As we have already seen, you can expand this sort of home protection system easily, so it can carry on being useful even if your new property is bigger or a completely different shape. This gives you one less thing to worry about in the new place.