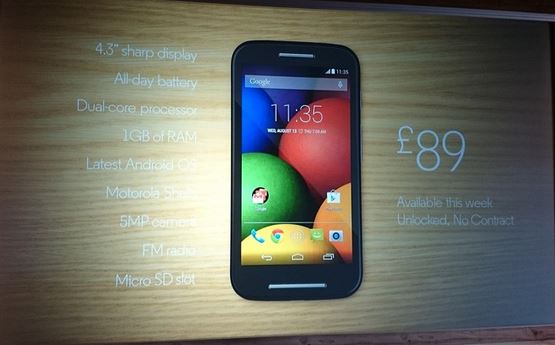 Motorola has just officially launched the most affordable smartphone from the company yet,  the Moto E is coming in shelves of India and the UK.

According to Motorola, the development of Moto E focuses on four key factors: build, power, style and software. And primarily, at this consumer-friendly rates you can have the Moto E with the resemblance of Moto G/X that features an edge-to-edge 4.3-inch qHD display with 256 ppi density. It’ll be utilizing Android 4.4 Kitkat with exclusive ads such as Motorola Alert and Emergency Mode.

Under-the-hood, there’s a combination of a Snapdragon 200 SoC pumped by two Cortex A7 cores clocked at 1.2GHz and a 400MHz Adreno 302 GPU working on the general and graphics processing. There’s also a 1GB RAM and 4GB of internal memory with microSD card slot that can bloat up Moto E’s storage capacity up to 32GB. And while you enjoy selfies, it doesn’t have a front-facing camera but just a 5MP main camera at the back. The battery also is rated with 1,980 mAh that can last an entire day on a single charge.

You can also choose the color that fits your style,  there are five color variants of grip shells and Moto E will be available in 9 color tones.

At the end of June, the company will be offering three new handsets with Moto G, Moto E which is under $150 and mainly signifies that the company is ending its featurephone quests.

Now since this unit will came in the shelves unlocked so you can just grab a prepaid plan then, maybe you can consider this genius internet baby —-or let’s say MTS 3GPLUS network. It’s a telecom network that promises superb internet experience, giving you an idea on how a new born baby is well familiar with the internet. The network is designed for data-junky subscriber which normally expect ultimate data browsing experience of highest speeds of up to 9.8mbps. Watch the cool video below.