The Guardian has just reported viaBeijing Times newspaper that China is considering plans to build a high-speed railway line to the United States through a channel that would be drilled from north-east China and up to Siberia then an underwater tunnel in the Pacific Ocean to reach Alaska and Canada. 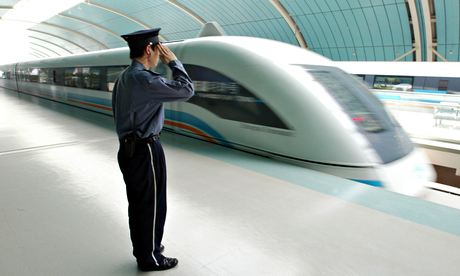 A magnetic-levitation train leaves Shanghai. The proposed US rail line would take two days, with the train travelling at an average of 350km/h. Source: The Guardian Photograph: Aly Song/Reuters

It’s one of the most aggressive plans in terms of land-sea transportation and engineering we’ve heard, just in crossing the Bering Strait between Russia and Alaska it would need a sophisticated engineering to build a 200km underwater tunnel –that would be the longest ever built. To support the feasibility, according to China Daily, the tunnel technology is “already in place” and will be used in Fujian-Taiwan high-speed railway.

The project dubbed as the “China-Russia plus America line” would be a 13,000km railway system that’s about 3,000km further than the Trans-Siberian Railway.

It will take you two days to complete the entire trip with the train traveling at an average high-speed of 350km/h (220mph).

It’s still uncertain if this huge project will push through considering the world super powers are involved and there are no words if China have met Russia, Canada or US –are we talking about security, political or progress, and it’s a complex matter?

How do you feel about this high-speed railway system for China-Russia-US, let us know in the comment form below.