From the wireless walkie-talkies to the iPhone 5S, there’s no denying that mobile communication technology has come an incredibly long way. Though the product of years of communication development of networks, signal and coverage, the devices that we use every day aren’t finished changing yet. 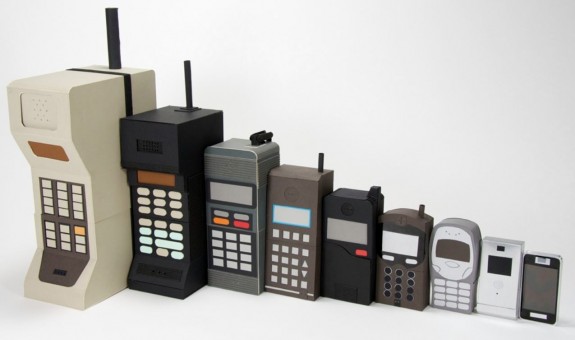 April, 1973 saw the first ever phone call from a cellular phone – similar to the ones we use today – made, and it was at the hand of its inventor Marty Cooper. In a BBC interview, Cooper stated that he wanted to create “something that would represent an individual so you could assign a number not to a place, not to a desk, not to a home but to a person.”

This notion is one that drove the creation of the first commercial mobile phone, Motorola’s DynaTAC 8000x, which was released in 1983. Since then, there have been many different types and models of phones, with different businesses leading the market.

From theheyday of the Nokia 3310 to the coveted colour-screened Motorola Razr V3 which boasted a 1.3 megapixel camera and 5.5 MB of storage, the use of the mobile phone in everyday life continued to grow. It was surely this realisation that more could be made out of the devices we were all keen to invest in that’s responsible for the gadgets we use today.

When the first iPhone was released in 2007, the market changed forever. It demonstrated technology that had never been seen in devices before with an auto-rotate screen and a sleek but ergonomic design. From here, Apple have remained as the market leaders, continuing their trend of popularity up to the most recent release of the iPhone 5S – but that’s not to say that Android based-systems used by the Samsung Galaxy and Sony Experia ranges aren’t pushing the boundaries of mobile technology further and further too.

Today, technology is simultaneously moving forward and backwards. In an age where being contactable at all times is seemingly an absolute necessity, Doro’s handsets have been designed with simplicity and ease of use in mind, particularly of interest for those that struggle with touch-screens, and have no use for mobile internet. As for the future of mobile technology, it’s hard to imagine what else could possibly be done to improve on the models that are relied so heavily on today.

However, as e2save’s recent piece on the future of mobile phones suggests, it could all be about embracing and combining tech that already exists. With Google Glass on the horizon, along with replacing our debit cards, presenting an augmented reality and 3D screens, the evolution of mobile technology isn’t complete just yet – and we can’t wait to see it.