One of the most common battery types is the AA. It’s used in a wide variety of electrical gadgets and its size makes it a popular choice where portability is important. First introduced as a standard as far back as 1947, the compact dimensions of the AA made it a popular choice for use in pocket torches and electrical novelties.

Although the smaller AAA size has supplanted them in some applications, the AA is still enormously popular. Try looking around your house or office and see how many devices you have that use AAs – you might be surprised. 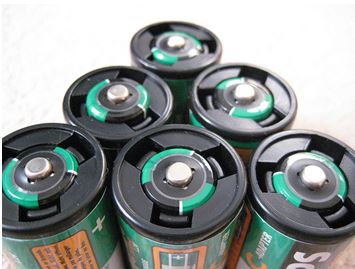 Like most other popular batteries an AA is made up of a single chemical cell – known as a dry cell. This works using a chemical reaction, the positive and negative terminals of the battery are separated by an electrolyte.

When you connect a battery and switch on positive electrons are generated at the positive terminal and negative ions at the other which leads to a flow of current making the device work. For a more detailed explanation take a look at this site.
As with other popular battery types you can buy AAs as conventional disposable types or as rechargeables that can be used over again. If you get though a lot of batteries this is likely to save you money in the long run even though the initial cost is higher.

You’ll find that the AA battery type is used in a wide range of devices from humble torches to sophisticated equipment like cameras.

Whilst it’s important to use the right type of battery for your equipment, in an emergency you can make creative use of AA batteries to replace the larger C type. They’re the same length, you’ll just need to wrap them in something to make up the bulk. This should only be done in emergencies and for short periods though as it will lead to the batteries overheating. They won’t last as long as a C type either, simply because there’s less chemical mass.

If you need to store your batteries for any length of time you should keep them in a cool, dry place. Storing them where it’s hot can lead to capacity loss. If the contacts become dulled you can clean them by rubbing gently with a soft pencil eraser or a soft cloth.

When it comes to changing batteries make sure you install them the correct way round – this is usually indicated on the device’s battery cover. If a device uses multiple batteries you should replace them all at the same time. Don’t be tempted to use a mix of old and new batteries or mix different brands in the same device as this can increase the risk of leakage. If you’re not going to be using a device for some time take the batteries out, again this reduces the risk of leakage and corrosion.

Whatever you want your AA batteries for, storing and handling them correctly will help ensure you get the best life from them and keep your device working smo