Personal, work, and business spaces have collapsed with the advent of mobile devices, in particular smartphones and tablet PCs. With such powerful computing devices coming at such portable sizes, any place you go to with a decent WiFi connection can be turned in a work area. Whether you’re at the airport, in a cafe, on the road, or even inside the comforts of your bathroom, it’s easy to stay connected with the rest of the world through the Internet. 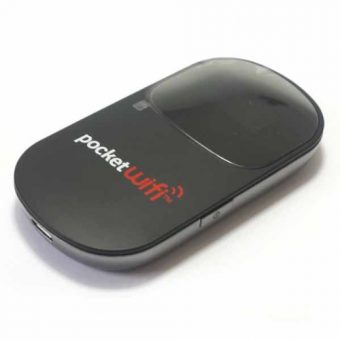 The Chinese telecom company, Huawei, has seen the opportunity in this lifestyle shift, and has been manufacturing a number of pocket WiFi devices providing the much desired Internet hotspot. Although not the first to develop the product, Huawei WiFi hotspots have become increasingly popular, and its E5 line

that’s getting a lot of rave reviews these days. For one thing, it solves a problem for those who want to get on a wired line via a full-sized LAN port. This means you can hook up to a hotel’s wired Internet connection, or even at a friend’s place and make it wireless. It’s certainly an additional feature that adds to its usefulness as a portable hotspot. This is also an especially useful feature for users who own devices with no built-in LAN, particularly smaller laptops like the Macbook Air, and ensures you don’t have to bring a portable router too.

Charging is relatively easy. You can hook up the E15151 to your laptop or computer via a micro-USB port and a single, full charge of its 1500mAh battery delivers a maximum working time of 5 hours. Maximum standby time when the Wi-Fi is on is 40 hours. Unlike your hotel connection however, Huawei’s mobile Wi-Fi is quite the workhouse as it can simultaneously support up to ten devices, with speeds that can go as fast as 21.6 Mbps on HSDPA.

While the E5151 does not have an LED display, it comes with the essential performance indicators. Users can also download an iOS or Android app to manage the settings of the device. Although it doesn’t have a microSD feature like Huawei’s other portable hotspot the E8131, it’s certainly a strong device for those who need dependable, reliable, and strong connections on the go.