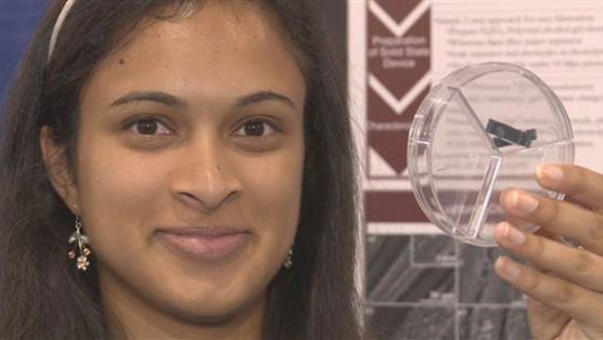 Her invention? An energy storage device that can be fully juiced in 20 to 30 seconds. Called a super capacitor, this device is able to pack a lot of energy into a small and cramped space. At the same time, the device is also able to charge quickly while holding its charge for a long time.

Eesha also notes that her invention is also capable of lasting up to 10,000 charge-discharge cycles, a big jump compared to the usual 1,000 cycles for the commercial rechargeable batteries available today.

In an interview with NBC News, she shared that her inspiration in developing her invention is her cellphone battery’s short lifespan. More so, Eesha says super capacitors also allowed her to further study nanochemistry, which she believes allows for significant advances in many other fields in science.

Applications for Eesha’s invention seem very bright. Although she has only tested the super capacitor in powering an LED (light emitting diode), she sees it to be fitted in cellphones, tablets, and other mobile devices that seem to grow more and more power hungry each day. With her invention, it could be possible for tomorrow’s gadgets to last not just hours but days or even weeks on a single charge. Also, her invention is designed to be flexible enough to be used in roll-up displays such as in clothing and advertising mediums. In the long run, numerous other applications could utilize Eesha’s invention.