With the battle for mobile supremacy now fiercer than ever, HTC and Sony recently released their respective gorgeous and awe-inspiring flagship smartphone contenders for 2013: the HTC One and Sony Xperia Z. Both handsets play pivotal roles as the two manufacturers fight for survival and a slice of the mobile industry market which is currently dominated by the likes of Apple and Samsung. Although the HTC One and Sony Xperia Z boasts different and varied capabilities and features, both generally appeals to multimedia-centric consumers hungry for unparalleled performance and streamlined and polished user experience. Who will reign supreme between the two? Read on to find out.

To allow us to better understand these two devices, let us first take a look at their spec sheets. 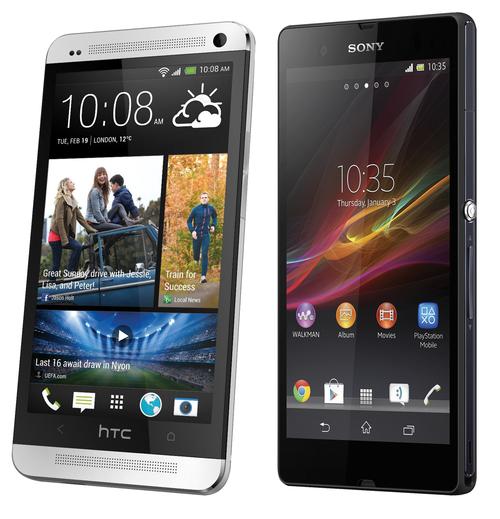 From the specs sheets, the HTC One trumps the Sony Xperia Z with its Super LCD3 display, aluminium unibody design, front-mounted Beats Audio stereo speakers and IR blaster. On the other hand, the Sony Xperia Z towers over the competition with its dust and water protection, all glass body design, larger screen size, micro SD support and a higher resolution camera.

In terms of build quality, HTC and Sony are both known to deliver great hardware design and reliability. The same holds true with these two new flagship devices, as both the HTC One and Sony Xperia Z not only looking amazing but feels very premium too.

Display technology, on the other hand, is a different story; with Sony employing the Bravia2 engine while HTC using its new Super LCD3 technology. All these translate to insanely high pixel densities unrecognizable in real-life applications. However, in terms of image quality, the HTC One is a tad superior to the Sony Xperia Z. It offers overall better contrast, viewing angles and color saturation.

Overall, it seems like the two are almost comparable in terms of hardware design and build quality. Both devices looks and feels well made, with the slight advantage going to the Sony Xperia Z with more practical advantages and dust and water protection. Screen quality goes in favor to the HTC One, while battery life comparison is a draw. Lastly, the Sony Xperia Z snaps better still images with its higher resolution camera.

With both handsets running on Android 4.1.2 (Jelly Bean), consumers can expect the user experience on both devices to be pleasant and stable. Sony, sticking to lesser customizations than HTC, provides a closer stock Android experience than the competition. Meanwhile, HTC tweaked much of the interface with its customary Sense UI.

Control schemes for both are also quite different and noteworthy. The Sony Xperia Z stuck with the traditional setup of three virtual buttons: back, home and app switcher. This configuration delivers a more intuitive and familiar Android feel to the control and works better with most apps. The HTC One’s setup, on the other hand, uses two hardware keys, back and home, with the home button serving three purposes: home function, Google Now and app switcher.

All in all, the Sony Xperia Z, which provides a more stock Android experience, wins this one. Complemented with a couple of additional features which are unobtrusive further enhances the overall usability of the phone.

The HTC One and Sony Xperia Z are both very capable and truly worthy of their respective flagship statuses. Each has their own distinguishing features and key capabilities that set them apart from the competition.

The HTC One sports a gorgeous aluminium body, enviable screen display and quality Beats stereo speakers. It was also the first flagship Android device to innovate in a completely different direction with its Ultra Pixel Camera technology. Battery life is also a bit better with the HTC One. The Sony Xperia Z, on the other hand, packs an all-glass exterior with dust and water protection – something unique among the current breed of flagship mobile devices. User interface is better too, as it sports a slightly enhanced stock Android experience.

Hence, we conclude this head-to-head comparison of these two new Android flagships with a draw, with neither one winning this hotly contested fight. It will now just boil down to the consumer’s preferences, priorities and needs as to which of these two new beasts to get.