We’d like to prove to you what nice, speedy chaps we are at Broadband, by passing on the speed to you; the “nice” we assume you know about already, if you’ve met our installation personnel.  So we’re offering some special incentives to increase your internet broadband speed. 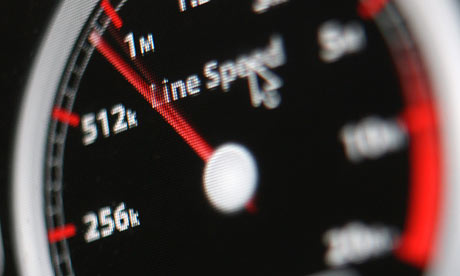 What kind of speed?

Broadband speed means—well, it means “speedy” internet action in connection and receiving.  It’s not a cliché to say that a broadband connection speed is lightning fast.  In fact, it’s a lot faster than lightning, which may take up to 1.2 seconds to travel from the ground to the sky; broadband speeds, especially the Superfast BT Infinity’s, can be shaved to milliseconds, both in uploading speed (that’s when the information is sent out, as in an email or IM) and in downloading speed (that’s when you’re receiving it, as in downloading a video or music).

Incidentally, in case you were wondering, broadband usage refers to how much data you use over the broadband connection per month.  Sending an email, for example, takes a mere 4KB of data—hardly worth mentioning.

There’s a broadband speed checker, which measures the speed of your system and your connectivity instantly, and shows you how lightning-quick you can travel even at peak times.  All you do is load your details (landline number, for instance) into the handy usage checker, and it’s ready to zip you an answer.

Want faster speed?  We’d like to recommend the aforementioned Superfast BT Infinity system, which gives your internet speeds up to eight times faster (that’s 76Mb, for those who like the stats) for downloading.  It comes free as an upgrade, along with any Broadband or Calls order including 40GB in usage per month, which is just our way of saying:  “thanks for trusting Broadband for your internet connectivity—now here’s some more speed to show you we’re serious about it.”

More speed wanted?  The BT Broadband Accelerator is a fascinating little widget that fits snugly into your phone socket with no interference or compromising of the signal, and boosts your broadband speediness by up to 1.5 MB.  That’s way faster than lightning.

And a Free Gift!

Now, you do need BT Total Broadband and wiring for extensions in your domicile, but that’s the minimal for most communicative households these days.  And since most households have more than one phone jack they use as a communication connection port, we’re giving you a free BT Broadband Accelerator when you order one.  That’s right—two for the price of one, just to get you moving faster online.

We told you we were nice, speedy chaps.