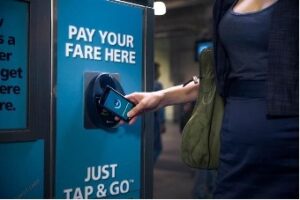 NFC or Near Field Communication is a feature that’s reared its head on numerous occasions over the last few years. Even when the iPhone 5 launched back in October, many expected it to be NFC enabled – and were a bit surprised when it wasn’t. However, after a bit of a stop-start, NFC finally looks like it’s about to take off big time with the emergence of the NFC SIM card from Vodafone.

So how is all this possible? Vodafone and Visa have joined forces to launch the Vodafone SmartPass in Australia early next year. This will finally allow payments in shops with the contactless PayWAve payment system. Anyone who wants to take advantage of the new app will need to get hold of an NFC SIM card from Vodafone which will contain the secure pre-pay account information to support any transaction. Indeed any Smartphone with NFC will be able to work with it. The way it works is that a customer signs up for a pre-pay account and they then select an account they want to make their TopUp payments from. There are a number of security protected controls, including a PIN for any purchases of over AU$100. Payments under this amount don’t require a PIN or a signature to process, and there’s also a unique pass code to lock access to the application should you wish to use it.

As soon as the card is in credit, all you have to do is use the virtual button on the SmartPass interface at the bottom of the screen near a till point to make a payment. Apparently this is supposed to minimise the risk of accidental payments. However, as an extra precaution all transactions are covered by Visa’s zero-liability policy. What this means is that as long as any unauthorised payments are reported immediately, then the account holder will not be held responsible and charged. To facilitate this, users will have access to a portal where accounts can be queried if they look suspicious, or even cancelled if the phone is stolen. Additionally there will be no historical sales data stored on the phone or the new SIM card itself, as all transaction will be managed by a third party company.

80% SmartPhones to be NFC enabled

A Vodafone spokesman Thomas Roets reported that “Vodafone intends to have 80% of Smartphones in sold in 2013 to be NFC enabled” and they will pre-load SmartPass on all new compatible Smartphone from spring 2013. This is great news, but maybe not so much for iPhone 5 users, since Apple declined to include NFC in its latest release.

As SmartPass accounts are linked with the new SIM card and not phone, this means that the SmartPass account will be transferable between all compatible devices. Customers with NFC enabled phones can just upgrade their SIM cards whenever they like to take advantage of this new technology. Like many new technologies, they can take some time to catch on. However, we can eventually see NFC Smartphone payments replacing the need for a lot of the cards we currently carry, and even replace vouchers, ID, travel tickets or entry passes in the long term.

Sheridan has worked in both IT and mobile phone marketing for many years, and has a keen interest in all technological developments. She currently writes insightful articles and expert review content for GizmoBird and other blog sites about interesting events and developments in the mobile world.