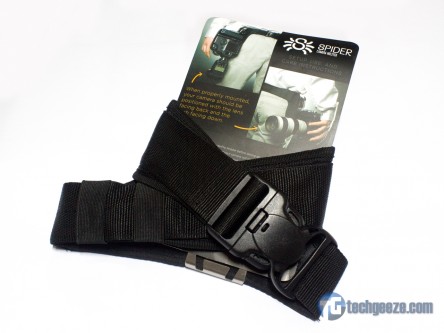 While TechGeeze is generally a technology-based news and review site, today will be somewhat different, though not totally. As many might notice, photography nowadays has gone completely digital — thus you can essentially count it as tech — thus, we’ll review it. Introductions aside, let’s tackle one of the more menial tasks photographers in general have… handling their equipment. You’ve read that correctly, photographers have a harder time handling their gear than tweaking the settings of their cameras to get that perfect shot. DSLRs nowadays have an included strap that you can carry around your neck. But if you have cameras with behemoth lenses that can weigh tons (not really, but you get the picture), you wouldn’t want to have that laying around your neck, right? So here’s where the camera holsters come in, but how assured are you that they’ll be able to keep your camera secured and isn’t at the risk of falling of? We’ll try to answer that question with at least one of the holsters in the market today. Read on to have a concise review of the SpiderPro Camera Holster. 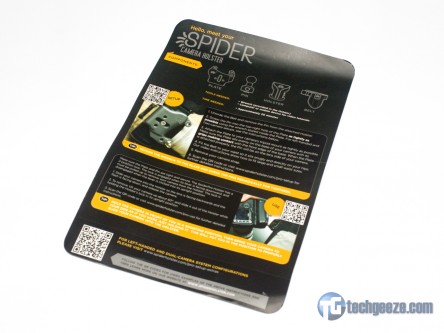 It’s not an unboxing per se, but who needs boxes for these hard stuff? The holder comes in a carded package where the holder strap itself is wrapped around it. From the presentation alone, you would have an idea that this is serious stuff. Going on the card itself, it acts as the label and a quick instruction sheet as it has details on how to setup your camera prior to attaching it, as well as simplified instructions on how to set it and use it.

Now the holster isn’t the cardboard itself, the bulk of the package is comprised of the belt (or SpiderPro Belt as they call it) component which is also colored black and is seemingly made of tough but comfortable materials. As mentioned, the belt itself wraps around the holster unit so you have to unclip the huge buckle first before seeing the other components. These components mainly comprise of the holster unit, the plate which is attached to the camera base, and the pin — the key component in this whole accessory. These three are definitely made of solid metal, which gives an assurance that how serious this product is in keeping your camera hanging where it’s supposed to be. So the presentation is simple, but that’s all you need. 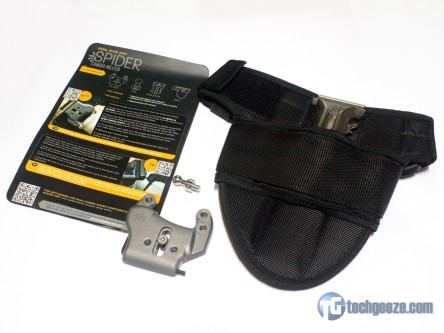 The SpiderPro Single Camera System is comprised of four major components, like mentioned above. First is the SpiderPro Belt. It’s length is of any typical adult-sized belt, so that won’t be a problem. For comparison, it’s made of the same kind of materials typically found in mountaineering equipment, that’s tough stuff. When you buy the holster, it comes with the SpiderPro Holster already attached to the belt. Made primarily of stainless steel and hardened aluminum cast, it is definitely tough, yet not too heavy that it will add extra weight to the already heavy camera attached to it.

Then there’s the SpiderPro Pin which is made from stainless steel and attaches to the standard hardpoint at the base of your camera. While it may be small, it is integral in securing your camera. Then what about the SpiderPro Plate? Well the guys that designed this already thought of the probably question you might ask when planning to get this accessory — what about tripods? Yes they have it covered, but we’ll discuss that in the review proper.

Outside of the four main components, it includes an extra wrench for what we think is detaching the holster from the belt itself, though not recommended, and two extra screws. From these alone, we can say that this is one holster with heavy-duty shooting in mind. 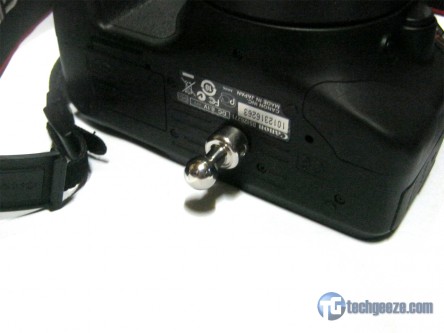 So how do we start in reviewing this accessory… let’s tackle it’s ease of attachment to your DSLR. Now you might think upon seeing the images of the components above that it’s too complicated. It’s even stated in the package that there are video guides on their official site of its proper usage. But it isn’t really that complicated. All you need is to screw in the SpiderPro Pin at the base of your camera and your set. Just slide it in the holster going down and it is locked into place. Now they specifically mention that when tucked at the holster, the lens of the camera should be pointing back.

Now that’s easy, so how should you be able to pick up your camera when it’s time to shoot? The holster itself has a two-position lock that securely holds your camera and prevents it from dropping. Simply switch the lock in the down position and the camera is locked in the holster, to release it just push the lock up before you feel a click. This releases the pin and let’s you draw the camera for shooting. Now why did we mention ‘before you feel a click’, this is because that’s the position where the lock is fully open, meaning you don’t have to push the lock to get the camera. Just hang it in there and when in use, just remove it. Though personally, we won’t use this mode often as this might cause accidental dislodging of the camera from the holster body but a nice feature nonetheless.

As for the belt itself, it fits snuggly onto any adult-sized waist and won’t go anywhere. Like we said earlier, the
belt’s buckle is a huge clip that unlocks at two points. Usual click-on buckles only needed the press of the two side points to unlock. But for the SpiderPro Belt, it gives an additional unlocking button that retroactively gives a better grip just in case the two side points are accidentally pressed. So yeah, they really know how to secure things. As for adjusting the belt itself, it uses a long strip of velcro to keep everything fairly locked and minimizes the chances to belt becoming suddenly loose due to the heavy equipment attached to it. We have to admit, that is a nice touch. 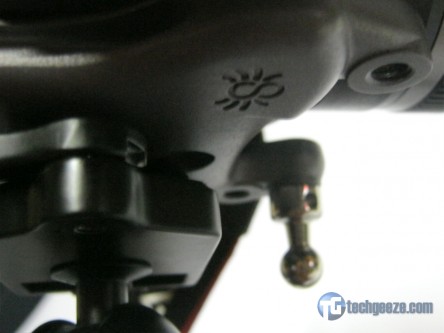 And that’s three out of four components… if the prior three is all needed to bring your camera anywhere, then where does the SpiderPro Plate fit in all of these? Tripods — let’s not forget that photographers and their tripods are like best friends when trying to get that steady shot, whether on a studio or on the go. Using the plate for the eventual tripod support doesn’t even make things complicated with the holster. Just attach it to the base of the camera with the screw provided, then attached the SpiderPro Pin to the plate and all should work like the previous configuration. The plate itself has multiple points at to which the pin can be screwed in so there’s a variety of ways that the camera can be held with it in use. Do take note though that if you’re going to use the plate, the camera will be off-centered when attached to the tripod so try to compensate it especially when using heavier gears, but that won’t be a hindrance overall. 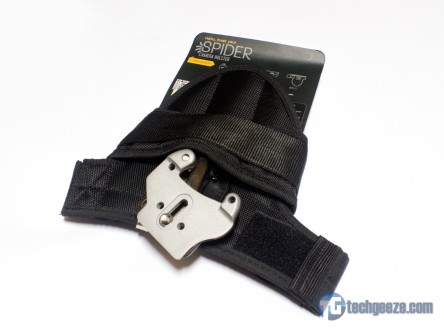 If anything, SpiderPro’s Single Camera Holster System is one of the more secure accessories for DSLRs we’ve seen. Most, if not all, of its key elements are made of hard steel which reinforces the promises it offers when handling your equipment. This is very important since most of the tools in the market are either plastic or mostly plastic. As for usability, it might take a little online guide or two to get used to the system SpiderPro introduces, but once you get the hang of it, you’ll appreciate the system more for what it does. We also liked how it handles the camera’s attachment point to tripods and how it is integrated to the system. Other products might just let you remove the camera entirely before you can attach it to a tripod. Overall, we see this product as an effective means of handling your equipment, especially for those photographers who are really on the go. For more information about SpiderPro’s Single Camera System, as well as their other products, visit them at spiderholster.com. Highly recommended.