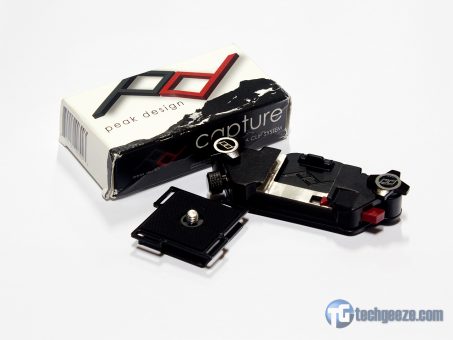 The next item we’ll be reviewing is very similar to the previous one. Photography enthusiasts will benefit this best as we’ll be reviewing another one of those camera holster accessories to at least present them with options. For those that found the SpiderPro Single Camera Holster a little bulky to setup, then here’s an alternative. Here is the CAPTURE Camera Clip System, and the name alone suggests that it’s not a holster — it’s a clip. Now what difference does a clip have with an holster. A simple explanation would be that it’s a holster without the holster or belt part. Now you guys can see where they’re coming from here. What advantages does having a clip alone over a complete holster entail? Read along this review to find out. 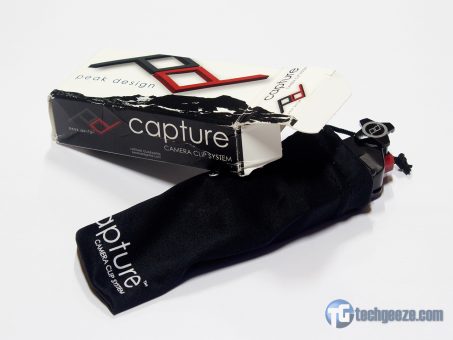 This is where the CAPTURE shines — it’s simplicity of presentation. It comes in this small box that’s even smaller than those that come with your smartphones. It’s an overall white package that with the peak design logos all over it. Not only that, aside from the product storage, it also acts as the manual on how to use the clip — effectively hitting two birds with one stone. If they can afford to actually include the user guide in that small package, then it must be easy to use this thing, right? We’ll answer that in the review proper.

Inside the box is just a black pouch bag that houses the clip itself. It’s made of a back sturdy cloth that again as the peak design and CAPTURE logos in it. And you could probably guess what’s inside the pouch. Opening it reveals the clip itself, no assembly required and no loose pieces inside. This gives the impression of how simple and it easy it is to use — and in fact, it is. But we’ll again detail that in the review proper. Other than that, the packaging and presentation they’ve made for this guy is really effective. 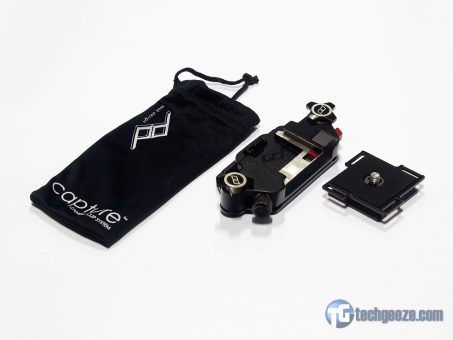 As mentioned earlier, it doesn’t have much inside the box — and that’s all you need when using the CAPTURE. The beauty of this setup is that everything comes in a single package and is ready for immediate use. The pouch bag it comes in allows for easy carrying of the clip if it is not in use — as if the clip being locked onto a belt or strap isn’t easy enough. The pouch keeps it from being lost with your other camera gear inside your bag.

The clip itself comes as a single piece when you take it out of the package. When you take it out and hold it for the first time, it gives this sense of heft without being too heavy to carry — which would defeat the portability of this clip if it is. So what materials does the CAPTURE comprise of? We let them explain it better:

The main components of Capture™ are die cast aluminum parts that receive post machining for guaranteed precision. The quick release button is made of high-strength, low-friction Delrin thermoplastic. The clamping bolts are made of a cold-forged zinc alloy. In addition, there are three stainless steel springs, two assembly screws, a camera connection screw, and a neoprene pad. All parts are corrosion resistant, which makes Capture weather resistant. 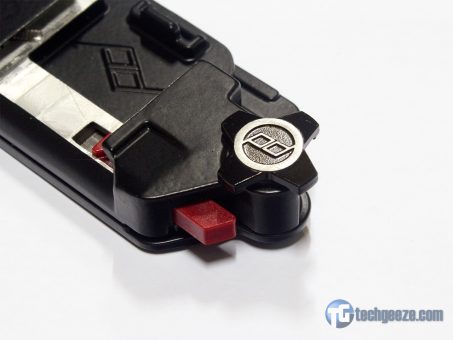 The key to using the CAPTURE is its ease of use. All you need to do is loosen the screw at the side near the red unlock button, open the clip sideways and clip the belt or bag strap in between. You can place it horizontally or vertically, it won’t be an issue. Attaching the connecting plate to the base of the camera is also a no brainer as it uses the standard screw hole diameter that most DSLRs use — allowing for compatibility across multiple manufacturers. Though in our tests, one limitation of this system is that while the connecting plate has a screw hole for the tripod connectors, you won’t be able to clip the camera with the tripod connector attached.

The CAPTURE uses two lock points to secure the camera. First is the red button that allows you to keep the camera locked in place when not in use. To release the camera, just press the red button and you’re ready to go. If you’re not going to use the camera and you want to lock it further, then this is where the second lock point comes in. At the other side of the clip is a screw lock that will tighten the connection of the connecting plate to the clip itself, virtually locking both pieces in place.

Another the selling point of the CAPTURE lies in it’s versatility. In comparison to the Spider Holster which requires you to use the included strap, the CAPTURE doesn’t as it can be virtually be attached to any strap or strap-like contraption you may have. If you use a belt (and we’re pretty sure that you do), you can attach it in your belt. If you’re one of those back-packers that have their bags every time, everywhere, then you can connect this to those backpack straps for easier and more secure access. Here’s another neat treat, if you use those shoulder/mailman type of bags, then you can also attach the CAPTURE to the sling strap and you’re ready to go. Not only is the CAPTURE versatile, but it could cater to more users because of the myriad of ways in which you can use it.

The same concept of versatility also shows in the camera connecting plate. Aside from being universally compatible with tripods and hand straps, the plate itself can be attached at multiple orientations with the clip itself. The key here lies in the square shape of the connecting plate. With this setup, you have four orientations in which you can lock the camera with your clip — which functions best on how the clip is placed. Whether you put it in your belt, in your bag strap or in any other scenario mentioned above, you can attach your camera to how you see fit and won’t be limited on how the clip works. 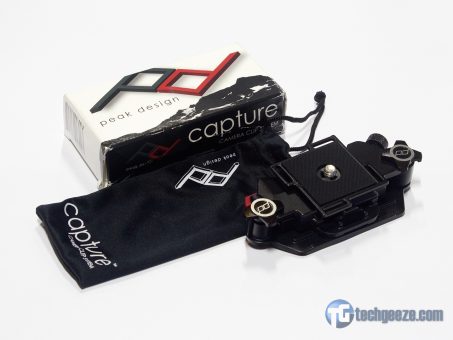 What we really dig about Peak Design’s CAPTURE Camera Clip System is how easy and compact it is to use, yet is presents so much options on how to use it. This presents a lot of options on flexibility which will allow more people to buy it. Similar camera holsters tend to intimidate casual DSLR users as some may find it overkill to buy those particular accessories. But CAPTURE and it’s small form factor will not only attract the casual photographers, but as well as the hardcore ones due to the multiple uses this has. The official site even has a video entitled “CAPTURE for Moms” which demonstrates this fact. So yeah, do we recommend it? That’s a no brainer — if you’re a photographer on the go and but wouldn’t want to have your camera hanging all over the place, then the CAPTURE is a definite advantage to have with. Peak Design currently sells them for $79.99 and for more information about the CAPTURE and their other products, please visit them at peakdesignltd.com.