Ever since the birth of science fiction in the 19th century people have enjoyed predicting what the future holds for technology. While some forecasts from several decades ago can seem quite laughable now they still managed to get a lot of things right. While the concepts in this 1960s prediction of the future may all sound familiar, the hardware still seems stuck in a bygone era. One thing that this video didn’t predict was Apple’s revolutionary concept of producing stylish looking gadgets.

With modern computers and Photoshop it is easier than ever for future enthusiasts to offer their vision of the coming technological landscape – and it is also easier for them to make their creations much more convincing. Perhaps these concepts will seem quite laughable in a few decades time, but for the moment they offer us a glimpse of some of the things we might be able to expect on our mobile phones in the coming years. 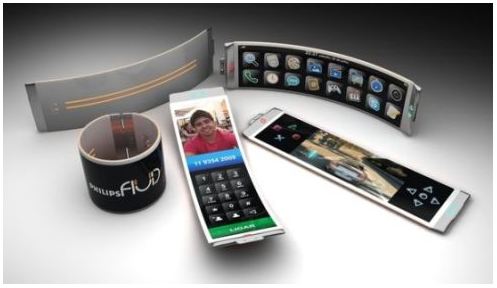 Philips is not a particularly well established name in the world of smartphones but it is one of the companies hard at work developing a bendable OLED screen. The applications for such a screen are almost endless, but one that has got concept phone designers particularly interested is the idea of a bendable phone.

The Philips Fluid concept phone, designed by Dinard da Mata, will allow you to hold your phone like a current touchscreen device, or snap it round your wrist like a watch. You can also bend it at a slight angle to stand it up for watching videos. While many people like the idea of a watch phone they are not too keen on missing out on a phone they can hold up to their ear, so a flexible smartphone could be the perfect solution.

Your browser may not support display of this image.

Another company hard at work developing bendable screens is Samsung. A few months back the blogosphere went crazy over a new leaked Samsung Galaxy Skin which featured a bendable screen, only for it later to be revealed as a concept.

Although the Skin is just a concept, designed by Haeseong Jee and Haeyon You from Hongik University, Samsung is hard at work making bendable screens a reality. These would of course feature Samsung’s trusty AMOLED technology which would single them out from bendable OLED screens produced by other companies such as Philips.

The Galaxy Skin design would get around the major problem faced by the Philips Fluid, as not all of the phone is bendable. While the screen is bendable there remains a ‘normal’ phone section at the bottom that could be used to house unbendable components, and allow the Galaxy Skin a more traditional form factor. Because of this we will most likely see phones like the Galaxy Skin before we ever see a Philips Fluid. In fact, if rumours are to be believed we may start to see flexible Samsung phones during the first half of this year. 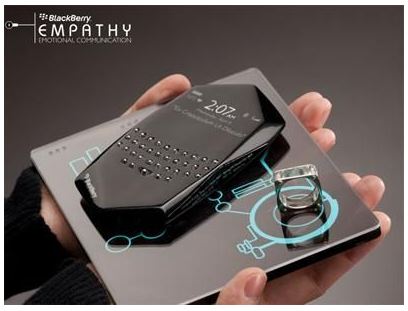 BlackBerry is losing out in the current smartphone market to the iPhone and a plethora of Android competitors, and a phone like the Empathy is the sort of thing that RIM really needs to reinvigorate its smartphone business.

The Empathy features a very unique gemstone design that still manages to include the BlackBerry QWERTY keyboard that you would expect on other devices. The aesthetics are not really what is interesting with the Empathy though as this phone comes with a Mood Ring that can use Twitter and Facebook to let people know how you are feeling.

This is social networking to the extreme, and will perhaps only appeal to New Age crystal healers, but it is certainly an interesting idea that no company has yet explored. How exactly this Mood Ring works is not quite clear and probably the main reason that the Empathy hasn’t made an appearance since it was first conceived at the Art Center College of Design workshop back in 2010.

Of course it is not too difficult to just tweet what you are feeling, or update your Facebook status with an emotive message – but the Empathy does offer one suggestion for the future development of social networking on smartphones.

One feature that is helping BlackBerry phones sell despite stiff competition is BlackBerry Messenger, but with the likes of iMessage for the iPhone and cross-platform apps like Whatsapp being readily available BlackBerry is losing its edge. Perhaps if it was able to offer a new level of messaging through emotions RIM might be able to win back some of its consumers. 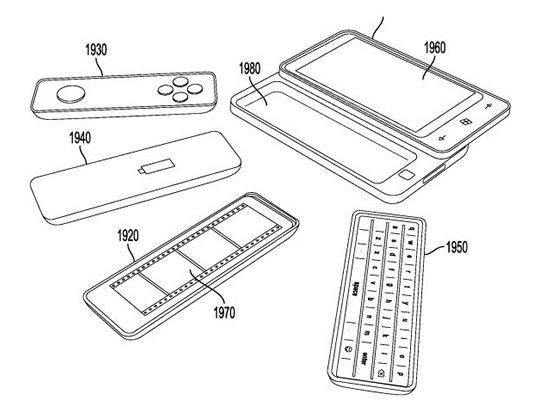 This is not so much of a concept as a patent. Microsoft filed this patent for a sliding touchscreen phone that includes interchangeable modules where you would expect to find a QWERTY keyboard. These modules include a keyboard, obviously, a control pad for games, an extra battery and an extra touchscreen.

With this modular design you could combine lots of functionality in one phone. You could have a phone focused on gaming like the Sony Ericsson Xperia Play, while at the same time having a phone that is great for messaging and emails with a full keyboard. All you have to do is slot in a new component when needed.

Microsoft was not the first to come up with this idea. It was previously explored by an Israeli company called Modu. However it didn’t quite work out for them and the company ceased trading at the start of 2011. Microsoft has more of a market presence and more money to throw into development than Modu so it is quite possible that we could be seeing such a phone in the future. Interestingly, Modu’s patents were purchased by Google – so this modular phone design could be the source of a new wave of patent lawsuits in the coming years. 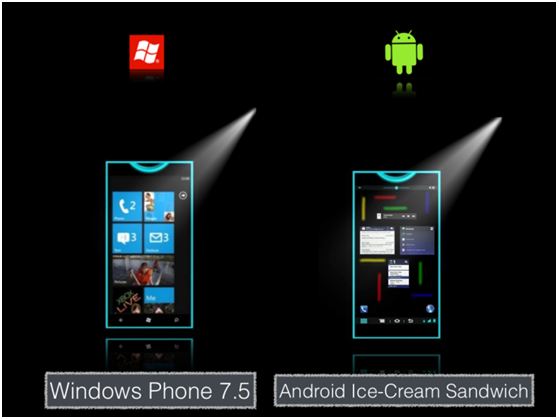 The Xperia Vision looks more like the Nokia Lumia than an Xperia NXT phone. On the surface it wouldn’t appear to be very outstanding in comparison to phones already on sale but one unique feature of the Vision would be its ability to run Android and Windows Phone.

Designed by Shaik Imaduddin, the Xperia Vision would be offered as two different models, one running each operating system. This could be an ideal solution for manufacturers as often consumers will be interested in a phone but put off by its choice of operating system. Having more freedom in choosing the OS could help many phones to gain greater popularity. 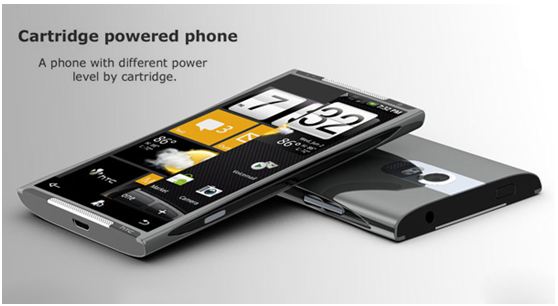 Not so long ago a similar concept was put forward with the HTC Tube designed by Antoine Brieux. Rather than being offered in two separate versions, the Tube would allow users to change the OS at will by swapping cartridges – in a similar manner to old Nintendo games consoles. With the same phone you could use Android one day and then switch to Windows Phone when you get bored. If such a cartridge OS system does materialise it is unlikely that Apple would allow an iOS cartridge to be sold, leaving just a choice of two systems.

People predicting the future can often get things drastically wrong. It is not easy to see exactly how technology will develop as many new advances come about by accident or from a flash of intuition, rather than a progression from existing technology.

Predictions also fail to see the little detours that development takes. Predictions from the early 1990s of people sending faxes on touchscreen tablets saw the future of touchscreen tablets but failed to see that people would no longer need to send faxes. Likewise, the 1982 movie Blade Runner envisioned video payphones, but while people are indeed enjoying video calls today they completely missed the fact that in the future people would carry their own phones and payphones would become a relic of the past.

With the exception of the BlackBerry Mood Ring, the above concepts are all either in development or would not be too difficult to implement if manufacturers saw a real market for them.