One of the newest must have gadgets of the year just got a lot more “must have.” The Roku HDMI television plug-in has recently released an iPhone app that allows users to control their devices from their smartphones. While Android already has an app of its own, the iOS app is a completely interactive experience that gives a new dimension to the device’s capabilities. The best part about the iPhone version is that it is completely free. 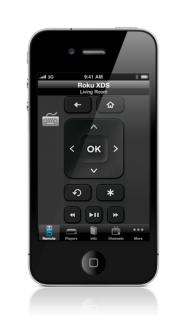 One of the most innovative features of the new iPhone app is the ability to control your television set without even having to look up at it. All of the controls and layout of the Roku are located on your iPhone which gives unprecedented access to anyone too lazy to turn out of bed and look at their TV. While this may sound like a grim assessment, it is actually a brilliant move.

While the iPhone app makes television surfing on Roku easier, the process was never too complicated to begin with. The original remote for the device only has 4 buttons and a directional pad that allows users to navigate their system. Instead of having a galaxy of unnecessary buttons like most cable providers, Roku is making television simple with their innovations.

One of the things that the minimalist remote does make difficult is typing in account information into fields. According to VentureBeat, the iPhone’s digital keyboard makes it a snap to fill out billing and personal information when signing up or renewing subscription services. Instead of fumbling around with clumsy controls, the iPhone app puts more power into the palm of your hand.

The Roku player has gained traction as a cheap alternative to purchasing a smart TV or an advanced gaming console. Instead of purchasing a more expensive device for a non-techie gift recipient, Maggie Reardon of CNET recommends purchasing the cheapest version of the product. You are guaranteed access to all of the staples like Hulu, Netflix, and HBO, and don’t have to worry about anything other than a broadband connection.

The Roku service is going to bring the world one step closer to a digital TV revolution. Cable companies will no longer have the same influence and phone companies like AT&T may only have the ability to publish the white pages after the public gets better connnected. Google is also starting to take over the phone business as well as offering television services.  Unless cable companies want to create less complicated interfaces and start charging for program packages ala carte, more and more people will start turning to digital solutions like Roku for their entertainment needs.

If you are looking for a gift or surprise for someone who is not “technologically gifted,” there is no better introduction to the digital media world than a Roku. Just make sure they know about the various quirks, mods, and apps they can download and purchase to go along with it.