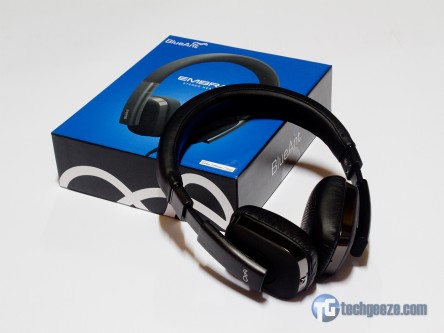 We’ve reviewed quite a number of headphones and earphone units here in TechGeeze, each has its own pros and cons, recommendations and distractions. So we have now established a sort of standard when reviewing these kinds of accessories. So adding to the latest of these music accessories is BlueAnt’s EMBRACE Stereo Headphones. As for the company itself, BlueAnt is mainly known for their Bluetooth headsets and handsfree speaker units. While they’re not a newbie in the sound/music field, this is their high-end consumer stereo headphone offering. Does it match up? Do we recommend it? Read down below in this review to find out. 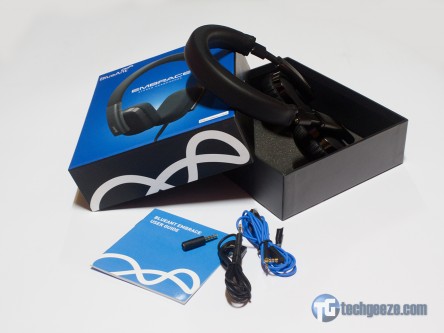 Now this has to be, in our opinion, one of the most effective packaging schemes that we had in terms of headphones. The product itself is presented in a simple yet elegant hard cardboard overlaying package that has product images of the EMBRACE in both front and back covers. The sides of the package also keep it simple with the company and product logos on each side, all in a black background. Then the rear has the usual features list and some more product images.

Cracking the box open reveals more goodness inside. First, we’re treated to a very nice leather-like pouch with magnetic locks. The pouch itself seems to be of high quality and has the product and company logos embossed in the front and back sides respectively. Further opening this pouch reveals the headphone unit itself in a very nice felt-textured inside surface, colored blue to match the BlueAnt moniker. As for the inside of the box, there’s nothing special about the top cover while the bottom one has a foam layer strapped at the bottom to give an additional cushion if the pouch isn’t enough.

All in all, we have to give credit to BlueAnt for providing probably one top notch product packaging as of date. Kudos! 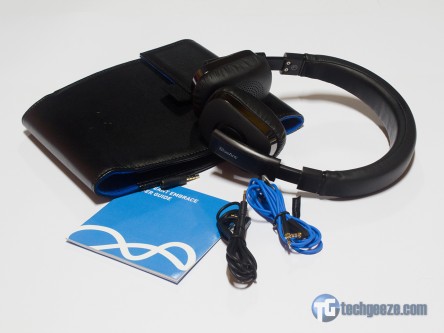 Going back to the insides, here’s what you’ll get. As mentioned earlier, BlueAnt provides a very nice leather-like carrying pouch to store your headphone piece, as well as your music player in it. Then inside this pouch is a little pocket that contains some more essential items. First is a pamphlet that basically acts as a user guide which contain some instructions on how or what of those inside the package should be used. Then we’re provided some cables, two to be exact.

Now, the user guide explicitly states where should a particular cable be used. First of the two is an iPod/iPhone/iPad compatible cable that has a built-in remote and playback control. Now this is to be expected as the box clearly states that the Embrace is made for the said devices. Then there’s the straight through cable for your other devices that don’t require a remote or isn’t compatible with it. The former comes in their signature blue color while the latter comes in black. We’ll get more on to those in a bit. Then as good measure, they’ve also provided an Apple adapter for your standard headphone jack. Then of course comes the headphone unit itself. But will cover it in the succeeding section. 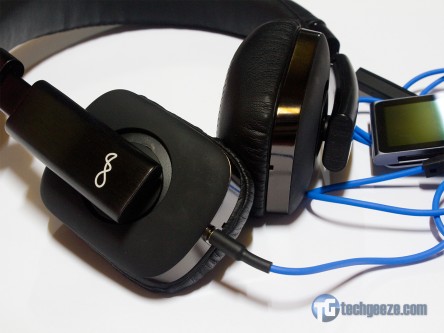 Let’s start with the form factor. Most headphones, at least the one we’ve handled, are typically made of some form of plastic. Now there’s nothing wrong with that, in fact they’re lighter when made of such materials. However, there’s not that sense of durability that most are looking when buying accessories along these lines. In fact, that’s the most common problem as to why people buy headphones, either they want a better sound experience or their current ones are broken. We’ll get to the former reason in a bit but as for being broken — the Embrace gives a certain vibe that it won’t.

They’ve stated in the packaging that the Embrace is made of aluminum, and it shows. When you fiddle with the headset, it gives an impression that it’s tough yet comfortable. That it won’t break with typical usage, unless you really stretch it to the limits, the Embrace won’t break that easily, at least when talking about the headband itself.

The drivers themselves are connected to the aluminum headband unit through some form of plastic joint that allows the earpieces to move freely to a certain extent. These ain’t like ball joints that allows a wide range of movement but allows some flexibility when trying to make a perfect fit. If there’s one point of weakness to the form factor, this would probably it as it can be a point of breakage, especially when you’re trying to pivot or rotate the drivers to a certain extent. However, their decision to make these plastic is completely understandable. If they’re to also make the said joints aluminum like the rest of the body, then it will have joint-stability issues and will cause additional weight to the headphone unit itself. 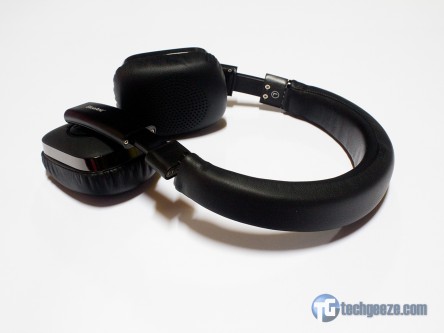 Now onto the driver units themselves. We’ll say this right here. This is probably one of the most comfortable headphone units we’ve had, hands down. If you grabbed the driver units by themselves, you’d feel quite a thick foam-like material on the earpieces. Some might say that it’s too much foam, but when you wear it, it’s probably the best headphone experience you’ll be having in a while. It also helps that the headband piece is also wrapped with the same foam material as with the ear pieces. And despite being made of strong aluminum materials, the headphone unit doesn’t really feel that heavy, nor that light. it gives a proper sense of durability and comfort right there.

Alright, we now go to the make or break part of these reviews… the sound quality. The promotional materials for this headphones brand this as producing “True to life sound”. What does this mean? For starters, if we’ll sweep the frequency spectrum for the response of this sound device, we’ll say that it’s pretty OK. It has the right balance of low frequency bass and high frequency trebles. You can clearly hear and distinguish the instruments that the music your playing has. Of course this depends on whether you play compressed audio, but assuming that your listening to loss-less quality, it sounds superb.

Some might be thinking: “but we want more bass or treble” or “this is a pretty mediocre piece of hardware”. This is where the natural sound of the Embrace comes in again. Unlike other headphones that very much rely on the hardware to produce, this one takes advantage of any equalizer preset the player has to produce the sound the listener wants. With a frequency range of 20Hz to 20KHz, we have a pretty wide spectrum to play with.

Let’s start with Techno tracks — now these often require powerful bass that more often than are complemented with synthesizer pieces due to the nature of how these songs are created. Other earphones tend to overpower the high frequency of these piano-like sounds with their bass drivers, but these don’t You can still clearly hear those keys – again provided that the equalizer settings are correct and the high frequency sounds aren’t amplified out. Jazz pieces on the other hand usually require clear mid to upper range responses, especially for all those wind instruments and beats. The Embrace also performs well in this aspect. Though at default, some might notice the little lacking of bass presence. Then finally we go to some rock music which is quite the opposite of jazz music and goes at the mid to lower frequency tones with all that guitar ripping and drum beating. The frequent complaint about these pieces is that how the guitar sometimes overpower the drums, particularly the higher frequency cymbals and the mid range snares. Now the Embrace sometimes fall to these hole as well, but it compensates it by trying to have those higher frequency sounds be more noticeable. And again, it also helps that your equalizer is set properly to match the said tones. Overall, the sound quality ranges from very decent to excellent. 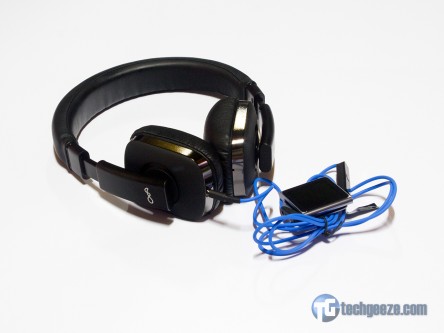 In this part, let’s get to the accessories. As said in the contents section, the Embrace comes with two cables, the Apple-compatible and the straight through variant. While both do what they’re supposed to, we have a very minor caveat about the said cables. The Apple-compatible cable comes in this blue hue that matches the overall blue theme of the company it comes from. This is completely understandable, it’s just that the said cables stand out too much when compared to the headphones themselves which comes in solid black with little highlights of silver thrown in at some places. While they also provide black straight through cables, we would appreciate it if they just kept both in neutral colors. But then again that’s just an aesthetic grips, so nothing serious. We also appreciate the fact that the cable itself is detachable from the headphone piece — which is another primary cause of how these things get broken. With this setup, aside from the easier storage, you can prevent cable overstretch as they’ll just snap off when applied with ample force, not breaking any electrical connections in the process. It also helps that they’re coated with this sort of rubber-like material — allowing the cable to be more resilient to being caught in knots easily.

Finally, the inclusion of a carrying pouch is a very nice touch from BlueAnt. Not only does this allow good storage for the headphones, but as well as the music device itself. To make things more compact, the driver units can be rotated inward by 90-degrees. Now, you don’t have to worry about big protruding ear pieces that plague these kinds of accessories most of the time.

Here is the part where we answer the questions “should we buy this?” and “is it worth the asking price?”. According to their official site, BlueAnt retails these headphones for $199.99 US-CAN. That might be a little too much for those wanting to have a great listening experience. Let’s go back to that last statement “wanting to have a great listening experience” — the beauty of this set relies on how it maximizes the feature of music players that mostly neglected by many, the equalizer. Sure they can have headphones with earth-shattering bass, but played at wrong EQ settings, other things may shatter aside from the earth when you play your music. This gives the Embrace the advantage as it “embraces” your music and all that goes in it. It’s also a real treat that BlueAnt added all these bonuses in the package. So to answer the question… it might be on the expensive side, but you really get every single penny that you pay to buy this set — Highly Recommended. For more information on BlueAnt’s Embrace and their other products, visit their official website at myblueant.com.

and see also some of best replacement headphones we recommend.