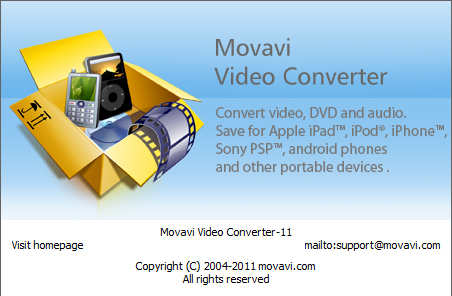 Before we go any further here’s another disclaimer. We here at TechGeeze support the movie industry and due to the nature of the software we’ll be reviewing, want to assure that this will only be used on legally acquired media for personal use. With that said, here’s the deal. More often than not, most of us have a mobile device that allows playback of video. Whether that’s an Apple or an Android device we would want to place video files for viewing pleasure on the go. Then in the other end of the spectrum, our entertainment systems allow playback of digital files as well, from our DVD players to the PlayStation 3, it would be best if we can always project those movies in our beautiful displays.

Unlike in our PCs where we can just install codecs when we encounter a video playback issue, hardware players are a totally different story. We can’t just install codecs there as their playback is simply limited with the hardware itself. The obvious solution is to convert our video. And that’s another problem as there are tons of video formats out there that the anyone new in the converting scene will be pretty much overwhelmed. Thus, the need for a simpler converter but versatile enough to handle multiple formats is very much appreciated these days. This is where Movavi’s Video Converter comes in. Now what differs this converter from the various ones out there? Find out in this review of the Movavi Video Converter. 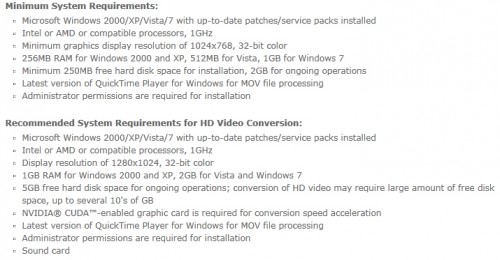 As with other video conversion/processing software, it is more or less a must that you have a good system to start with or else, your conversion will take ages. Also, if you’re using an NVIDIA video card, then you’re in luck as this converter will use the capabilities of the card to help in graphics processing, thus making faster conversions. Another note to point out is that this software required an installation of QuickTime for it to read MOV files. Though we think most of you who have iTunes installed (which required QuickTime) for your mobile devices won’t see this as a problem. Those who don’t might come into trouble when converting QuickTime files. 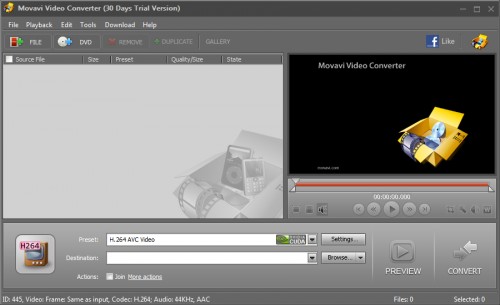 Before going in detail with the more technical stuff, let’s first look at the interface. As you can see, the window is composed of mainly three panels. At the left is the file panel where you queue the video files for conversion. Then on its right is a preview window where it allows you to cut and preview how the converted video will turn out. Then at the bottom is the presents panel where you can select which video conversion preset is used. Let’s take a look at each of the panels and their functions at the screenshot below: 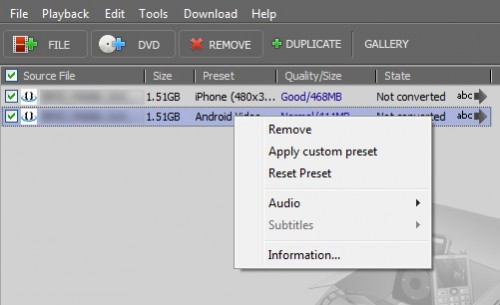 We can see that the program allows for batch processing, which is very convenient for those who want to take a whole season’s worth of video and place it in their device. In this way, they can perform a single conversion, leave the program then return afterwards with the converted files, ready for syncing. Then take note of the preset column. You’ll notice that there are two presets used in the files. By the way, for this test, we’re using the same file. In effect, we can convert a single file to a variety of formats and presents in a single conversion. Also note in the context menu is the audio selection option. With this, you can select which audio track you would want the converted file to have. You can convert a file with the original audio then convert it again with the commentary track, the program enables you to do so without so much hassle. 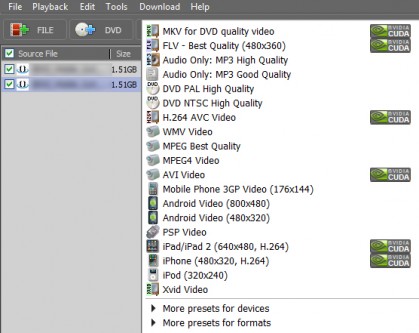 The screenshot above shows all the available presets that you can use in the conversion, all available in the bottom panel of the program window. This is where the program shines, as seen here, there’s a lot of presets that’s available for use. From the old AVI formats, to the new MP4s, to the newer MKVs, this program recognizes them and can convert with ease. Also seen in this menu are the formats that would benefit if you have an NVIDIA card installed as the program will utilize the graphics processor in making the conversion faster. Now, if you want to tweak the settings more, click on the “Settings” button to reveal options for each preset, as seen below: 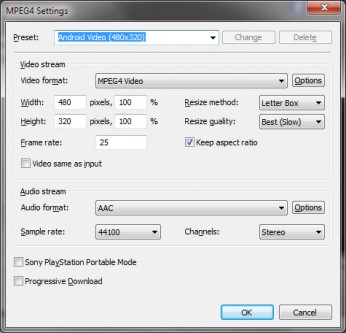 With these additional settings, you can control how the program will crop your video, it’s frame rate, as well as the audio encoding to be used. We have to give a fair warning though here. Being video encoders ourselves, we recommend that you read some articles first on aspect ratios and frame rates before tweaking these settings. You might change the frame rate then suddenly the audio is out of sync or you might change the aspect ratio then the video might look stretched. We can safely say that at default, these settings are enough for your typical video conversions and are compatible to the hardware formats they represent. 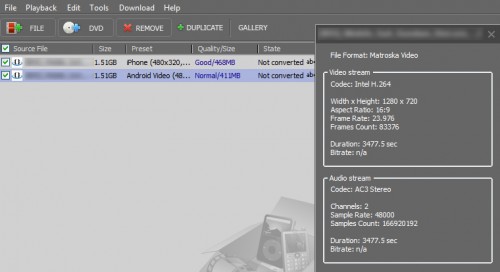 If you’re unsure of what the source video’s frame rate is for example, you can right click on an item in the file queue then select “Information”. As seen above, the program will determine what’s the encoding preset used by the source file, as well as it’s aspect ratio, resolution, and frame rate among others. 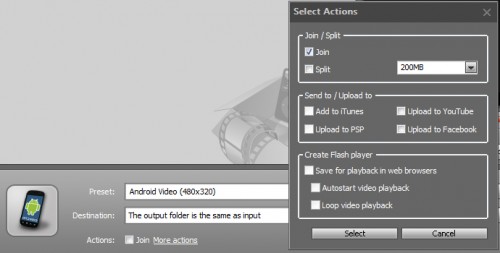 Other actions that you can perform include file merging where you can join two clips into a single one, then the opposite of it – file splitting – where you can split the file in two ways. Either do it by file size of by the no. of minutes, all of which are customizable numbers. You can also automatically upload the converted videos to your YouTube or Facebook accounts or if you have your own site, it can generate it’s own flash player for use in your site. These are really nice though some are not readily available and will require installation of additional components. 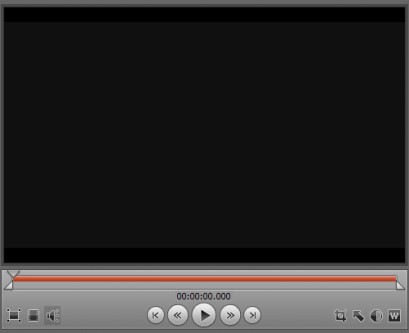 Finally to the right of the file queue is the preview panel where the resulting video after changing the settings will be previewed. Unlike other programs that just show the video, this converter has an additional purpose, As seen in the seeker bar, there are two markers both in the left and right. The purpose of these two markets is that they set the points in which the video will be trimmed. That’s right, not only does this program convert, it also has basic video editing capabilities, and by basic we mean very basic. It has options for cropping the video frame, rotating it, as well as do basic adjustments like brightness and contrast. It can even deinterlace interlaced video as well as add your own watermark though only in text form. 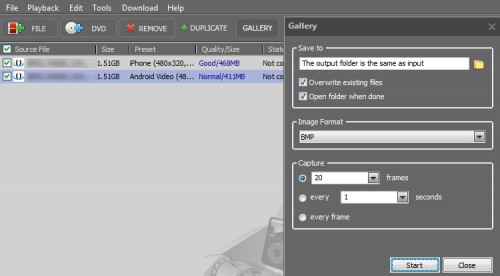 The program also has a bonus feature that will be liked by movie reviewers. Clicking on the “Gallery” button will bring up the popup window above. This feature allows you to grab screencaptures of the video at a predetermined time interval. You can then save it in either JPG or BMP formats. They can then use these images for their own websites for review or comparative purposes.

For those who wanted to create their own GUIs or batch conversion scripts but would want to use the features of this program may now do so. This is because the converter has a built-in command line interface (CLI) that can be easily invoked when the proper commands are entered. To make things easier, the program includes a guide in using the CLI for all the commands and switches used.

What we like about this program is that it is very powerful without becoming too complex. Yes, there are a lot of open source programs our there that can do the same but won’t charge the $30.00 that Movavi is asking. But remember though, those open source programs are built and compiled with the video encoders in mind, not the casual users that would just want to get their videos into their mobile devices. And again, given that we’re encoders ourselves, video conversion is something that can easily involve a lot of technobabble; with terms like Deinterlacing, Quantization Matrices, Video Containers, Variable Frame Rates, Inverse Telecine and Color Spaces; many would appreciate a relatively simple program that will get the job done. So yeah, we do recommend this converter and your money won’t be wasted. For more information on how to purchase your own or get a trial version to test it first, go to Movavi’s Video Converter page.