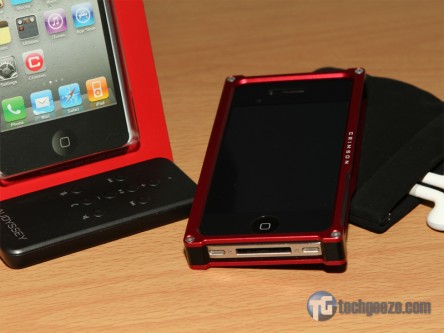 While many are going crazy over the near-release of the iPhone 5 as of this review, there are still a lot holding onto their iPhone 4 and are nowhere just letting them go. Thus, it is imperative that this smartphone is always kept safe against the elements. Doing so often means that the phone is to be placed in a protective casing that will prevent breakage from accidents or misuse. Now, there are a lot of cases out there providing protection from the skinny to the bulky that will often cover most of the phone surface. What if there’s a case that can offer the same level of protection at a minimal coverage? A case that won’t be intrusive of the iPhone 4’s design-related functionality. Well, that’s what Crimson aims to do with their Aluminum Frame Case (AFC) for the iPhone 4. Will it live up to its promise? Find out in our review. 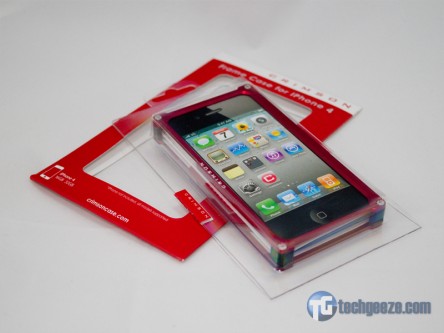 The case comes in a crimson-colored cardboard envelope that has a plastic clam-type enclosure that contains the case itself. The front of the package has the usual company logos and product name. While the middle part of it is emptied out so that the plastic clam-type enclosure is protruded to give a sense of how thick the case itself is. Turning the package to the back reveals the same company logo & product name and the same emptied space corresponding to the one in front. The rear part contains mostly information about the case itself, including features and accessories.

To open the cardboard envelope is simply an act of pulling the single bottom flap sealing it. Once unfolded, the plastic clam-type enclosure easily slides out containing the case itself. The clam-type enclosure is then sealed with two red stickers at each side. Tearing those will reveal the case and will immediately give a feel of how sturdy it is. As for the accessories, they’re mainly enclosed by the case itself. In order to get them, first pull the “tool kit” flap at the top part and you’ll be getting a small zip lock bag with a hex wrench and two extra screws.

Opening the case just to pull the other contents doesn’t require removing all four screws, just undo two and you can get the other accessories inside. These other accessories then include and instruction pamphlet, a Crimson microfiber cleaning cloth and front-and-back anti-fingerprint film surface protectors. 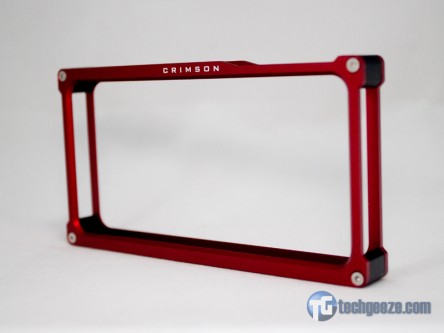 As earlier mentioned, most iPhone cases are either made of rubber or plastic. With the AFC being made form aircraft-grade aluminum might give some notion that this is heavy. Now this is very much the opposite as the case, even with the packaging, is very lightweight. Weighting at only 19 grams, it won’t add a significant weight to the iPhone 4. The finish of the aluminum is very well done and despite coming in multiple colors, it doesn’t give any impressions of paint chipping or scratching. The finish on the cases is anodized, not painted or powder-coated. The color should last for a VERY long time. Getting a hold of the case itself will already give a sense of quality with how precise the form factor is. And with the Crimson logo engraved at the font, it gives a “tough elegant” look into it.

The major selling point of this case is its minimal intrusion to the iPhone 4’s visual appeal. As they said it themselves, the iPhone 4 is a masterpiece of beauty and engineering so why choose a case that conceals all that beauty? We think that they’ve made a great approach in the design. The case is aimed at giving the protection with very minimal of surface area covered. As we’ve noticed, the case employs protection by giving emphasis on the corners of the phone, the areas at which it will be likely damaged when hit upon dropping or something similar. And while the case itself is made of aluminum, we kind of wonder as to why they chose resin for the corner guards. More of those concerns in the main review. 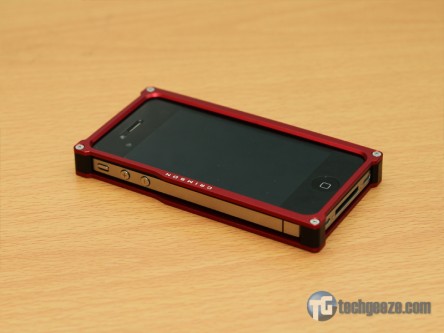 Let’s start the installation, fortunately for us, Crimson has provided an Allen head wrench for us to use because the case includes screws that are tiny. And if you have big hands (or fingers for that matter) you may have difficulty in placing the screws in their designated holes. For good measure in installation, leave one screw intact upon opening the case and then turn the front cover to fit the phone, then attach the other screws afterwards.

Now, let’s focus on the main selling point of the AFC, which is to provide ample protection without having to cover the iPhone in itself. The case achieves this by having the corner edges of the phone be protected by the aircraft-grade aluminum case — in essence like placing corner borders to your iPhone. For the aluminum itself, we have no doubts about it. The finish is great, as said earlier, it doesn’t give any impressions of paint chipping or stress. 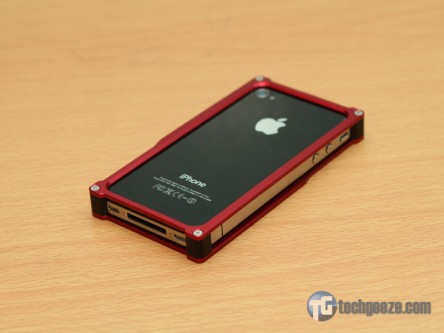 Aside from minimizing the hidden surface for the iPhone, this design doesn’t inhibit the attachment of accessories with larger jacks than the usual ones. This is one problem that most cases have. Since their tolerance to jack sizes are from very minimal to almost none, they’ll have limited selection of accessories due to the case and not to the phone itself. This is also the same problem encountered by those using their iPhones in speaker docks. There are a lot of instances where they have to remove the protective case just to dock their iPhone because of the little to no tolerance of jack sizes that the other cases provide. So this is a definite plus for the AFC. 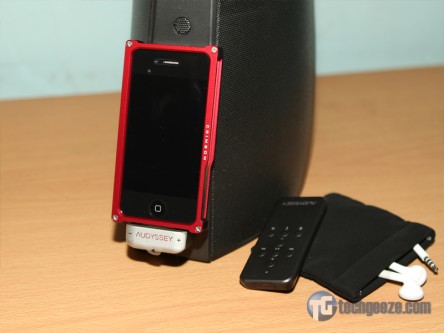 It won’t be made of aircraft-grade aluminum if it won’t do much protection for the phone. Unlike other cases that are stuck deep to the iPhone surface to minimize bulk, the AFC does the opposite and maintains a small clearance between the surface of the phone and the case itself. Now many would ask, will this setup provide bulk to the iPhone? Not necessarily. Since the case is made of aluminum, it can be formed to relatively thin shapes without compromising material strength. So while the case itself is “skinny” and provides clearance to the phone, it won’t introduce that much bulk. Another advantage of this setup is that is allows the case to absorb much of the force that impacts the phone when dropped. This is because while the case is hard, it can flex enough to absorb the force of impact and with the clearance from the phone, the force transferred to the phone itself will be minimized. 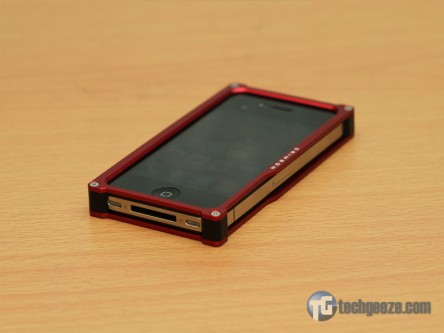 Another thing to note is the form itself. Looking at the case straight on, the side with the embossed logo has a part of it indented. If we’ll look at it from a functional perspective, it allows the easier access to the volume and ringer buttons which are consequently placed on that same side of the phone. However, do take note that the orientation that the case can be attached to isn’t limited to one. If you try to flip it by having the Crimson logo at the right side of the phone when attached, then what you will have is thumb guard using the same indent of the case. This will then provide an easier grip on the phone despite the relatively increased bulk. This orientation will also protect the same two buttons on the left from being pressed accidentally.

Here are some negatives we see in this design approach. For the material to have relative strength given that the frame case is thin laterally, they made the frame thicker when viewed directly. And while not that thick, it will give some bulk to the phone as compared to a conventional case. It’s not that detrimental to the design, but it is something to get used to. The design is also not that gender-flexible as the case really gives a tough feel to the phone and to the owner itself. Finally, unlike other cases where you just slid the phone in, the AFC couldn’t be easily taken on or off at a whim as you needed to screw/unscrew 3 screws at least to change cases. Though Crimson probably sees that the case won’t be replaced or taken off easily given its open design, thus its longer installation time. 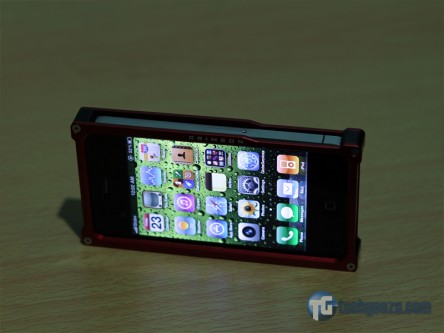 Overall, this kind of casing will please the minimalists or those who don’t want to cover the beauty of their iPhones. The Frame approach provides an effective way to absorb impact forces though it may be insufficient for damage that may be caused by direct impact to the surface not covered by the enclosure. However, there are still deficiencies to the design, given that the minimal surface coverage it has. At this point, it’s just a matter of compromising between coverage and design. So for the $39 price tag it has, it may be a bit on the pricey side but we assure you that it’s worth the price.