In the ever growing demand of the internet nowadays, maximizing it requires the most efficient of resources out there. And having a great dedicated server is a great asset to have. There are a myriad of options to choose from, but there is this particular one that sounds interesting… and by sound we mean literally. Here is ServerClub, from the initial get go, you might think of it as a geeky-themed party hub of sorts. But we kid you not, ServerClub is a dedicated hosting service that was initially private.

ServerClub is a brand registered to the Florida-based company ServerClub Inc. The company was initially founded so that we could ensure the highest quality dedicated web hosting facilities for our own company. But as the system we created has worked so well, we are now inviting the public to join our Club. 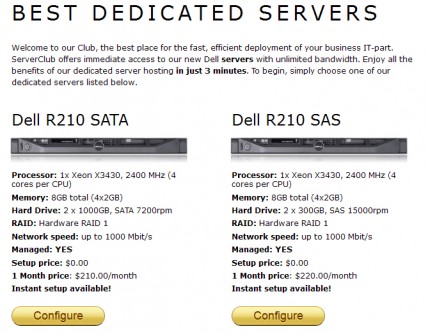 So here’s the section where you actually get to choose the servers for whatever purpose you may have. Now you have a great variety of hardware to choose from. They’ll show the information you need to pick which one to get, instant setup is also included at no charge as seen above. Clicking on the configure button below each will reveal an additional page that as the button implies, allows more configuration of the servers.

This page will give the user more options on what’s bundled in the server package chosen. Options include the memory to be used, hard hard drive as well as the operating system. They’ll also provide customization for the all-important network resource. This is a make or break for some, especially if you’re targeting high-volume usage of the servers. In conjunction to the network resource, they’re also giving options on its payment, as well as response in the case when bandwidth limit is exceeded. Again, this comes across as a common problem with sites that receive high volume and not anticipating an exceeded limit. ServerClub comes in response by allowing you to either cut the bandwidth to 10 Mbps or automatically purchase traffic when needed. This comes as a good package though you don’t have options as to how much BW you’ll be buying, at least in this page.

If those customization options isn’t enough for you, then why not add your own? Also included is a text field that let’s you specify what you want your servers to have beyond what is listed in the site. Though it is noted that additional features won’t be available in their instant setup gimmick and till take at least 24 hours. Nevertheless, that’s already fast for a customized server. 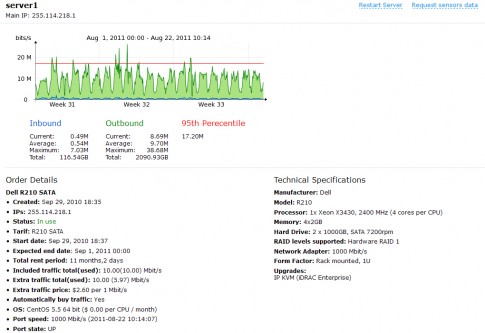 Here’s one great feature that the site has. If you’re not yet sure of whether getting a package with them or not, you can then try the Demo mode. By clicking on the Demo link beside the Register link, you’ll be brought to a page that will basically simulate a running server, actually 3 running servers so that’s more realistic. Though you’re not really allowed to tweak with it, it does give a clear look of how the user panel will look like.

At the least, you’ll be able to tweak on how the data is displayed, whether on a per day, week, or monthly basis. You’ll also see how much traffic is used depending on the available bandwidth to give an idea on whether let’s say spending 43 Mbps is truly worth it or you can just settle with a smaller cap. Also shown below is the current configuration of the servers to give an idea of why this is the performance and can be used as basis to whether up the technical specifications of the racks.

For the website itself, ServerClub gives the information you needed in order to setup an account with them. Now granted that it won’t be an all-stop-shop for those wanting to get their own web server hosts, the website itself can definitely help, especially with the demonstration they provided. Now while other services may also have the same features as ServerClub, you’re assured that coming from a previously-private hosting solution, they had it going for them to be able to go public with their services.