If you’re reading this using IE, don’t try to close it and read this on Safari or Firefox we won’t judge you by that, but unfortunately you might be part of this claim. As a Canadian firm AptiQuant have discovered under their study called “Intelligent Quotient and Browser Usage” that users of Microsoft’s Internet Explorer (IE) browser have a lower IQ level than users of other browsers. 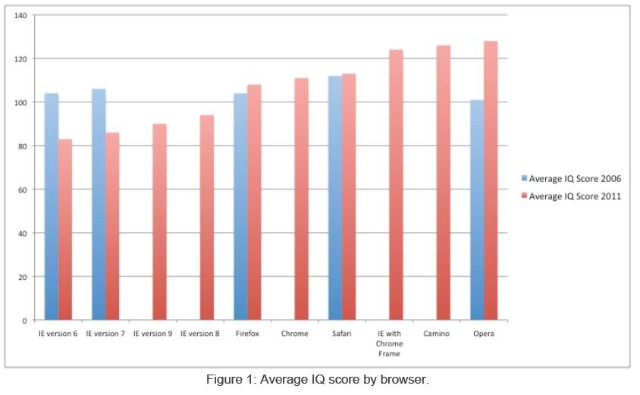 AptiQuant have participants around 101,326 with age above 16 for the browser usage IQ test. The participants is grouped based from the browser they use. Ultimately results shows that Internet Explorer users have an average IQ score of just above 80, making it the least quotient compared to Firefox/Chrome and Safari/Camino users who have IQ score of 110 and above 120, respectively.

The study also added a very interesting fact that shows that the older versions of IE users have even lower level of IQ. This really corresponds to the poor rating of the browser’s versions such IE6 who’ve been developer’s enemy for non-compliance to web standards and security issues. Now you have to guess why Microsoft have started banning the use of IE6 earlier this year.

In the end, it shows results: “Individuals on the lower side of the IQ scale tend to resist a change/upgrade of their browsers. Now that we have a statistical pattern on the continuous usage of incompatible browsers, better steps can be taken to eradicate this nuisance.”

It looks like anyone claims that even without study they could have told this story.

BBC reports that this “Internet Explorer story was bogus”:

It later emerged that the company’s website was only recently set up and staff images were copied from a legitimate business in Paris.

It is unclear who was behind the stunt.