As more and more rumors about the next generation iPhone keep coming, so does the many leaked images of possible accessories and cases from the Chinese factories. With the consistency that Apple has with their products, it won’t be that daunting of a task to make a mockup of how the phone will look like based on these leaks.

Based on these, the Apple-related news site Mac Rumors has commissioned the great guys at CiccareseDesign to produce high quality and very believable mockups to give us somewhat an idea of how the iPhone 5 will look. Now these are, again, based on the leaked case and the design team took into consideration how the cases should fit, as well as the ports that might correspond to the holes around the cases.

Easily spotted in this cases is the longer hole for the home button. The 3D designers took in what could be the more obvious reason why this is so. As seen in the image above, the home button might be longer than the previous one. This could also be interpreted as the same sized home button but with more room for swiping from left to right and vice versa. 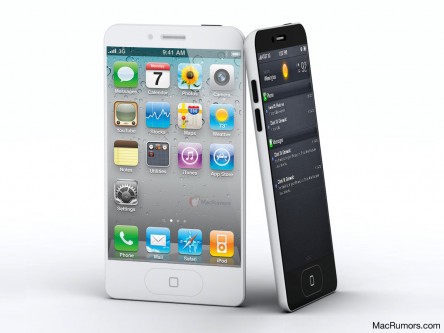 Another design point to take note is what exactly the screen size is, again open to a lot of interpretations. As seen the screen has a larger area taken from the front of the phone. Though as Apple has revealed with iOS 5, they’re introducing a “swipe down” from the top of the screen feature for notifications. If this is the case, this would require more finger room for the upper part of the case and thus, the screen might not be as large as the ones shown here. But then again, the rumor mills suggest that Apple might be increasing the size of the screens for future iPhone models. 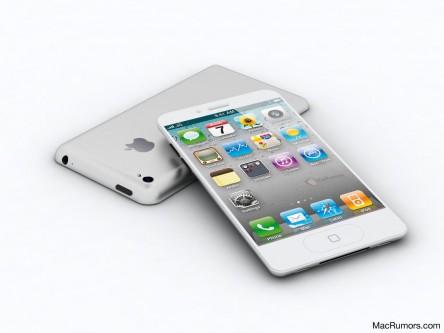 Taking a look at the back, these renders feature a design aesthetic quite similar to iPod Touch or the MacBook Air. Also, rumors suggest that Apple might return to the original aluminum backings from their glass ones implemented on the iPhone 4. Finally, dimensions. Based on these renders, the dimensions might come at 4.33″ x 2.36″ and .27″ while the iPhone 4 has 4.5″ x 2.31″ x .37″. With this, the iPhone 5 is possibly thinner, shorter and wider than the previous generation. Again, while these are just renders based on the leaked cases, these will give some idea on how the iPhone 5 will be as we near its release during September or October 2011.