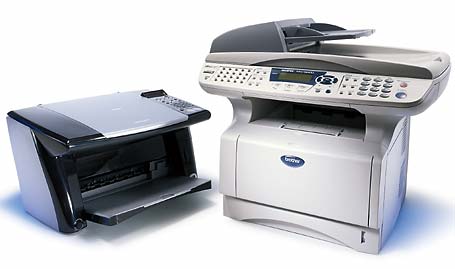 Buying a printer nowadays are a no-brainer as there are really times that you’ve got to have that hard copy of something rather than a file. For personal use, choosing a printer to use is very easy, but for commercial and small business use, that’s another issue. More often than not, when buying a peripheral, we look at its price and that immediately determines or greatly affects our purchasing decision. For devices like printers however, there’s another aspect we’d call as the ‘cost of ownership’. Let’s get into that as we move along.

Now what’s this cost of ownership? Well, owning a printer, especially for small businesses mean two things. First is the cost of the printer itself, then second is the cost of refilling the ink. As we all know, printers use ink and there’s no printer that has an infinite supply of it. And while inkjet printers are cheaper than laser ones, its ink refills are more or less the opposite case. They even have a general rule of thumb for it… “The cheaper the printer, the more expensive the disposable costs for refills.”

Inkjets are simple, great for personal use

So yeah, if you’re into a small business and you wanted to have a printer for use, think twice before getting an inkjet. Now this is depending on the small business that you have. Inkjets are better for photos with its simplicity and allows printing for a variety of media. Let’s take some figures. Jeremy Shulman, Vice President for Operations at Relnk Technology, which resells remanufactured ink cartridges, gives an example of a typical $55 inkjet with black ink costing $19. If an average cartridge allows 170 pages worth of printing, then we can see where we’ll be at after some time.

Assuming you’ll be printing 7 pages per day at around 300 working days per year, that would be 2,100 pages which entails $235.60/year… at this point, the cost is quite obvious.

Lasers are for business, they print a lot

Laser printers are known for printing pages, fast. And being in a business means the demand for printing is much greater, requiring more ink. Though laser printers won’t get dead cheap like their inkjet counterparts, in the long run, a small business would benefit from getting the former.

Laser printers are known for printing in high volume, thus the more efficiency. While vendors often say a figure for engine speeds, more often than not, testing results suggest that these printers can achieve speeds roughly 50% greater than what the specs say. Small business also have higher volume of print consumption per day — we cannot simply use the 7 page/day analysis we had with inkjets. Let’s say a company at an average prints 50 pages per day, doing the same math will eventually lead to 15,000 pages per year — which in turn will amount to a staggering $1,596 worth of cartridges when using an inkjet.

In the end, despite being cheaper, inkjets are recommended for household and personal use due to the nature of how it works. It’s cartridges are also priced based on that assumption. Laser printers, while not cheap by themselves, will show their worth once used at high volumes, including the cost of it’s cartridges, a small business would get their money’s worth rather than when using the former.