Diminishing natural energy resources while the energy consumption demand amplifies through the technological advancement of machinery, buildings etc. To cope with future energy demand, we need to think more greener and rely mostly on renewable energy sources. Mainly talking about the available resources; the wind, hydro and solar are the most common sources were we harvest some of greener energy today. The development of how we harvest energy on it’s natural form were really developing wisely, yet, the solar could be prove a decent solution to provide enough energy to power our daily consumption. Today, the solar panels relies on its inefficient way of producing power only by day, however, on Arizona an innovative Solar Tower will rise producing renewable energy on far higher rate than the panels can generate. 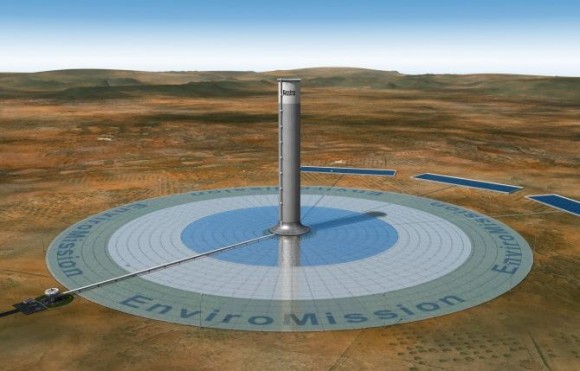 Created by EnviroMission and will be called as the Solar Tower to be built in Arizona desert, it’ll will rely on hot air produced from the rays of the sun to generate power, definitely different concept yet much efficient from solar panels who only works on daylight.

Towering heights of more than twice the Empire State Building while surrounded by monumental glass panels that forms the green house. The Solar Tower works when the glass was hit by the rays of the sun creating a greenhouse effect that boils the air underneath to as high as 90 degree Celsius. The difference in the air temperature above will pump the air upward creating a massive force to pass through 32 generators that produce power. A very simple approach if you have studied Physics, yet very innovative.

At peak time, the gigantic 2,625ft Solar power is capable of producing 200 megawatts that expected to supply power to 150,000 homes. There’s also no waste product other than hot air and can work in most weather conditions not to mention that its flagship tower is being built on unused land of a desert. In the long term of lifespan of around 80 years this is a very profitable investment which is built for amount of $750 million but it can be paid back in 11 years by selling the energy produced.

So how efficient this Solar Tower versus the solar panels, according to EnviroMission it’s around 60-percent efficient producing energy even the sun have settled down the horizon. But it’ll only happen if the greenhouse air temperature is still at certain point that it’ll have great differential so the production will run few hours after sunset.

In addition, the behemoth land covered by the greenhouse can support the growth of food, but we’re dubious if there’s a plant that will grow at a very high temperature.

By 2015, the Solar Tower in Arizona will start producing highly renewable energy. For the lifespan of 80-years, you’ll be able to see this monumental tower till 2095 and by that time we wish that thousands of Solar Tower was already built across the planet.