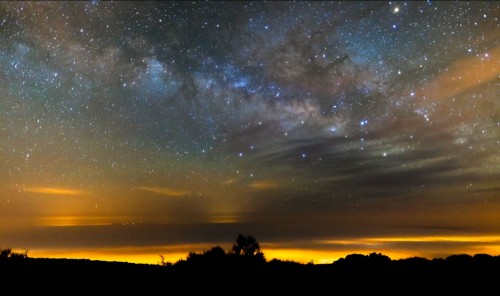 Back in November last year I bought my own DSLR camera because I travel a lot and really have an interest on photography. Knowing the flexibility of today’s digital cameras, most of them are used to capture high-definition videos and we almost see some known wedding and event videographers used them. In my personal interest and appreciation of nature, I have searched for some of the nature-wonder videos around the web and I fell down to TSO Photography’s time-lapse videos. Got the idea after I have climbed a mountain of about more than 2500 meters above the ground where my eyes was eaten by stunning star-show of the Milky Way. I was really afraid to take my camera out of the bag because of the moisture and got no sturdy tripod to hold my camera still. In the end, got few photos of what my eyes have seen that night. Breath-taking, and perfectly shown on this time-lapse videos by TSO. I take three of their most popular videos in this compilation, watch them (have goosebumps on the Aurora) and share them to others.

This was filmed between 29th April and 10th May 2011 in the Arctic, on the archipelago Lofoten in Norway.

My favorite natural phenomenon is one I do not even know the name of, even after talking to meteorologists and astrophysicists I am none the wiser.What I am talking about I have decided to call The Arctic Light and it is a natural phenomenon occurring 2-4 weeks before you can see the Midnight Sun.

The Sunset and Sunrise are connected in one magnificent show of color and light lasting from 8 to 12 hours. The sun is barely going below the horizon before coming up again. This is the most colorful light that I know, and the main reason I have been going up there for the last 4 years, at the exact same time of year, to photograph. Based on previous experience, I knew this was going to be a very difficult trip. Having lost a couple of cameras and some other equipment up there before, it was crucial to bring an extra set of everything. I also made sure I had plenty of time in case something went wrong.

If you can imagine roping down mountain cliffs, or jumping around on slippery rocks covered in seaweed with 2 tripods, a rail, a controller, camera, lenses, filters and rigging for 4-5 hour long sequences at a time, and then having to calculate the rise and fall of the tides in order to capture the essence – it all prved bit of a challenge.

And almost as if planned, the trip would turn out to become very difficult indeed. I had numerous setbacks including: airline lost my luggage, struggling to swim ashore after falling into the Arctic sea: twice, breaking lenses, filters, tripod, computer, losing the whole dolly rig and controller into the sea, and even falling off a rather tall rock and ending up in the hospital. As much as I wanted to give up, the best way Out is always “Through”. I am glad I stuck it through though because there were some amazing sunrises waiting. At 1:06 you see a single scene from day to night to day.

I asked the very talented Marika Takeuchi to specifically compose and perform a song for this movie, and what she came up with is absolutely remarkable. Thank you very much Marika!

This was filmed between 4th and 11th April 2011. I had the pleasure of visiting El Teide.
Spain´s highest mountain @(3718m) is one of the best places in the world to photograph the stars and is also the location of Teide Observatories, considered to be one of the world´s best observatories.

The goal was to capture the beautiful Milky Way galaxy along with one of the most amazing mountains I know El Teide. I have to say this was one of the most exhausting trips I have done. There was a lot of hiking at high altitudes and probably less than 10 hours of sleep in total for the whole week. Having been here 10-11 times before I had a long list of must-see locations I wanted to capture for this movie, but I am still not 100% used to carrying around so much gear required for time-lapse movies.

A large sandstorm hit the Sahara Desert on the 9th April and at approx 3am in the night the sandstorm hit me, making it nearly impossible to see the sky with my own eyes.

Interestingly enough my camera was set for a 5 hour sequence of the milky way during this time and I was sure my whole scene was ruined. To my surprise, my camera had managed to capture the sandstorm which was backlit by Grand Canary Island making it look like golden clouds. The Milky Way was shining through the clouds, making the stars sparkle in an interesting way. So if you ever wondered how the Milky Way would look through a Sahara sandstorm, look at 00:32.

I spent a week capturing one of the biggest aurora borealis shows in recent years.

Shot in and around Kirkenes and Pas National Park bordering Russia, at 70 degree north and 30 degrees east. Temperatures around -25 Celsius. Good fun.

Check out all TSO Photography videos here where all the credit goes from.