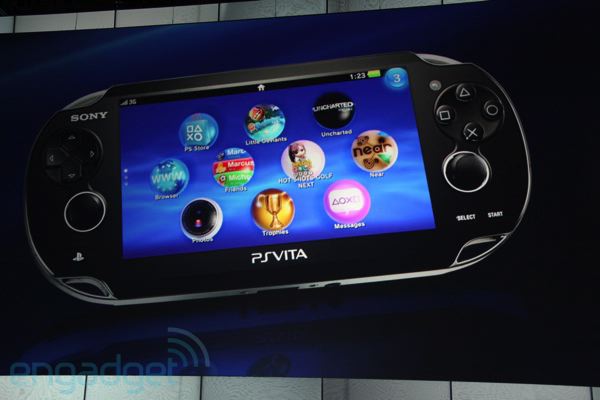 After all the teasing, image leaks, and samples for Sony’s next generation portable console, it’s finally official. Formerly known as the NGP, those who want the now-called PlayStation Vita (or PSVita) only has one question after the specs were revealed — the cost. So here’s the deal. The portable console will be available only at AT&T starting at $249 for the WiFi only version and $299 for the 3G variant. The PSVita will be shipping worldwide by the end of the year.

For those hiding under a rock, the PSVita will feature dual analog sticks, front and rear cameras, an OLED touchscreen complimented with a touch pad at the back. And did we forget that the thing runs on a quad-core ARM Cortex A9 processor and a quad-core GPU as well? Sony showed the unit being loaded with some of the more popular games such as Uncharted: Golden Abyss, Ruin, and Street Fighter x Tekken. Costing about the same as the 3DS, we are left to wonder how consumers will respond to this offering.

“Vita,” which means “Life” in Latin, was chosen as the most appropriate name for the next generation portable entertainment system as it enables a revolutionary combination of rich gaming and social connectivity within a real world context. SCE is aiming to transform every aspect of user’s daily life into an entertainment experience.

Also, by having both Wi-Fi and 3G network connectivity, together with various applications, PS Vita will enable infinite possibilities for users to “encounter,” “connect,” “discover,” “share” and “play” with friends wherever they are. On January 27, 2011, SCE announced the first PS Vita application, “near,” which will come pre-installed. It will let users discover what games PS Vita users in the vicinity are or were recently playing, as well as let users share their game information. “near” also enables location-based gaming features such as “gifting,” in which a user can access virtual game-related items that other users are sharing, through checking in at geographic locations that others have also visited. The virtual items can include content unlocked from games, such as character costumes, weapons, and treasures. Sharing these items between users adds a unique dimension to the portable gaming experience on PS Vita while enhancing the social connectivity among the PS Vita community.

Additionally, PS Vita will come pre-installed with a newly developed application called “Party.” “Party” is an innovative application for a portable entertainment system which enables users to enjoy voice chat or text chat not only during online gaming, but also when users are playing different games or using different applications such as internet browser. Through “Party,” which offers a new form of social networking, and “near,” which enables users to share their game information with other users anywhere, anytime, users can dramatically expand the boundaries of interactive communication.

Also a tutorial application called “Welcome Park,” developed specifically to guide every user about PS Vita’s brand new user interface such as the front touch display and the multi-touch pad on the rear, will come pre-installed. By playing “Welcome Park,” users can easily become accustomed to the three dimension-like finger motions used on PS Vita.

SCE will vigorously promote PS Vita towards the launch as the next generation portable entertainment platform and work towards expanding the portable gaming market.*1 Some title names are tentative. Titles may differ by countries and regions.

“We are dedicated to providing our consumers with the types of entertainment offerings that have made PlayStation a definitive leader in the gaming and portable entertainment industries for more than 15 years,” said Jack Tretton, CEO and President of SCEA. “With the official North American unveiling of PlayStation®Vita as well as the introduction of an extensive line-up of software, hardware and services, the PlayStation platform has never been stronger or more exciting for our customers. We believe that 2011 will be a defining year as we usher in a new era of portable gaming and drive widespread adoption of 3D through our content and hardware offerings.”

In March 2005, the PSP® (PlayStation®Portable) system defined new standards in portable entertainment and provided game enthusiasts worldwide with a new way to experience games outside of their living room. The PSP system broke through traditional boundaries then and has gone on to sell more than 70 million units since its launch. In January, Sony Computer Entertainment Inc. (SCE) announced a new portable device for a new generation of gamers — the next generation portable entertainment system (codename: NGP).

Derived from the Latin word “Vita,” which means “Life,” this next generation portable entertainment system enables a revolutionary combination of rich gaming and social connectivity within a real world context.

The PS Vita system incorporates a beautiful 5-inch multi-touch organic light emitting diode (OLED) as the front display and a unique multi-touch pad on the rear. Together with the front touch screen and the rear touch pad, the PS Vita system offers new game play allowing users to interact directly with games in three dimension-like motion, through “touch, grab, trace, push and pull” finger motions. Also the PS Vita system features two analog sticks which enable a wider range of game genres to be brought into the portable experience.

Additionally, conference attendees received a look at Capcom’s STREET FIGHTER® x TEKKEN® for the PS Vita system which will feature Cole MacGrath as a playable character from the popular PS3 franchise, inFAMOUS™.

In addition to an unprecedented line-up of first-party titles, third-party support for the PS3 system has never been stronger. Content shown at the conference includes the highly-anticipated first-person shooter BioShock Infinite from 2K and Irrational Games which will support the PlayStation Move motion controller, and will also include the original BioShock on the PS3 Blu-ray disc.

Additional exclusive content that will only be found on the PS3 system was announced for titles including Saint’s Row: The Third from THQ, Electronic Arts’ SSX™, Need for Speed™ The Run, and Battlefield 3™. For Battlefield 3, the PS3 version promises to be bigger than any other as Electronic Arts will be using the extra storage capacity of the Blu-ray to add a second game to the disc, Battlefield 1943, one of the most popular games available on PlayStation®Network.

As a leader in 3D entertainment and gaming, SCEA kicked off the 2011 press conference at E3 on the world’s largest 3D screen – showcasing a breadth of first- and third-party titles coming this year in 3D that is unmatched.

SCE today also announced the upcoming availability of the new PlayStation branded 3D Display. The 24-inch full HD LCD display will give PS3 users easy, affordable access to stereoscopic 3D entertainment. Available this fall, the 3D Display comes bundled with 3D Glasses, an HDMI cable and the highly anticipated Resistance 3 title from Insomniac Games for PlayStation®3 (PS3®) at an attractive recommended retail price (MSRP) of US$499.99. The 3D Glasses will also be sold separately, concurrently with the 3D Display launch for MSRP of US$69.99.

With more than 77 million accounts worldwide, PlayStation®Network continues to be one of the largest networked entertainment platforms in the world and is the premier destination for games, TV and movies, sports and music entertainment. Today, SCEA announced that coming this fall , BestBuy’s CinemaNow video service will be accessible to PS3 owners, providing consumers with access to more than 12,000 of their favorite TV episodes and movies for rental or purchase.