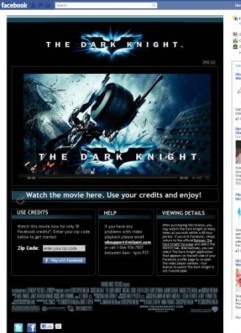 Now that’s a good way to spend all those Facebook credits, right? Warner Bros. is currently testing their new movie rental by allowing users who ‘liked’ the said films to watch them through its page for 30 credits ($3). To pilot this program, they’re offering ‘The Dark Knight

‘ available for rent or for purchase in its movie page. You can have the movie rented for 48-hours that you can pause any time and resume by simply logging back to Facebook and access that page. So yeah, they’re trying to make Facebook the new Netflix… or so to speak. Press release below.

PROGRAM WILL EXPAND TO DIGITAL MOVIE PURCHASES IN THE NEAR FUTURE

BURBANK, CALIF., March 8, 2011 – Warner Bros. Digital Distribution (WBDD), a market leader in video-on-demand and electronic sell-through, today announced it will begin testing an offering of selected movies for purchase or rental through Warner Bros. Entertainment’s Facebook movie Pages. Consumers will be able to use Facebook Credits to easily buy or rent a title, all while staying connected to Facebook.

Starting today, millions of fans who “Liked” Christopher Nolan’s blockbuster film “The Dark Knight” can rent the title through its official Facebook Page (http://www.facebook.com/darkknight). Consumers simply click on the “rent” icon to apply their Facebook Credits, and within seconds they will begin enjoying the film. The cost per rental is 30 Facebook Credits or $3. This offering is presently available only to consumers in the United States. Additional titles will be made available for rental and purchase on a regular basis over the coming months.

“Facebook has become a daily destination for hundreds of millions of people,” said Thomas Gewecke, President of Warner Bros. Digital Distribution. “Making our films available through Facebook is a natural extension of our digital distribution efforts. It gives consumers a simple, convenient way to access and enjoy our films through the world’s largest social network.”

Fans will have full control over the film while watching it through their Facebook account for up to 48 hours from purchase. They can choose to watch it in full screen, pause the movie, and resume playing it when they log back into Facebook. Consumers will also have full Facebook functionality including the ability to post comments on the movie, interact with friends and update their status.

“The Dark Knight”
The follow-up to “Batman Begins,” Warner Bros. Pictures’ and Legendary Pictures’ “The Dark Knight” reunites director Christopher Nolan and star Christian Bale, who reprises the role of “Batman/Bruce Wayne” in his continuing war on crime. With the help of Lt. Jim Gordon and District Attorney Harvey Dent, Batman sets out to destroy organized crime in Gotham for good. The triumvirate proves effective, but soon find themselves prey to a rising criminal mastermind known as The Joker, who thrusts Gotham into anarchy and forces Batman closer to crossing the fine line between hero and vigilante.