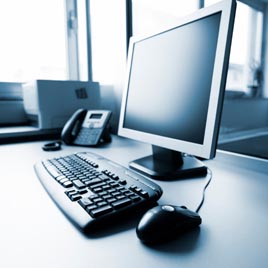 For a business buyer of desktops there are five major concerns: performance, energy, space efficiency, budget and support. Different businesses will have specific requirements from their desktop PCs; this article will look at performance and low power PCs suitable for businesses.

The performance category is most important to CAD, computer aided design, graphical work such as photo and film manipulation and publishing as well as any other role requiring large amounts of memory and processing power on the primary machine of the user. Some roles such as programming require powerful desktop PCs to compile code quickly to allow testing but this can be a shared processing core while the work is done on less powerful machines. In the performance segment the new Sandy Bridge processors are a major step forward for desktop PCs and are now becoming available once more following the recall of the first batch which had issues with port deterioration. On-chip graphics help; if a separate graphics card is not required then costs are lowered and maintenance is easier and with some language extensions it is possible to take advantage of the additional processing cores in the Sandy Bridge graphics to carry out many more calculations. Apple’s iMac is a powerful machine with Apple’s strong appeal for visual designers and artists, powered by a 3.06 GHz dual-core Intel Core 2 Duo processor with an ATI Radeon HD graphics card; it’s a fast all in one machine. Alternatively for a Windows PC the Dell XPS 8300 offers an extremely powerful machine at a good price, available for £560 not including VAT it sports the most powerful of the new Sandy Bridge line up in its unoverclocked form, the i7-2600, a quad core 3.4 gigahertz chip with some built in over-clocking ability for single threaded tasks as well as temporary overclocking of the whole chip to use the latent heat capacity of the heat sinking. This is combined with a useful 4 gigabytes of RAM and up to 4 terabytes of storage.

Low power desktop PCs are the choice of many environmentally conscious businesses both to save money though the significant power savings, especially through the use of power-efficient data centres where computation per watt is becoming the name of the game and to demonstrate their commitment to the ideas they are making in their mission statement. As the demand has grown in this area there are a number of good options available and it is only set to improve, in a big way in fact, as mobile phone processors which are designed from the very beginning to use minimal power are becoming powerful enough and the operating systems mature enough that they are beginning to migrate into laptops and desktop computers. Current market options include the tiny Fit PC2i, barely larger than an external hard drive, it can drive a widescreen display via DVI and has built in Wi-Fi, USB ports and a microSD card reader with an Intel Atom Z530 1600 MHz chip to do the processing, along with 2 GB of RAM and a 160 GB hard disk. Power use ranges from 6 Watts at a low CPU usage level up to 8 Watts at full power. The price is quite steep for the product, between £245 and £545 not including VAT. Visually it is striking and extremely space-efficient, it will have an impact on anyone who sees it but is expensive for what you get. More powerful but still energy efficient desktop computers come in the form of Lenovo’s Blue Sky desktop computers. Able to run on as little as 45 Watts on either an AMD Athlon 64 bit dual core or an AMD Sempron with hard drives from 80 GB up to 750 GB and 4 GB of RAM they are fully powered desktop computers that take little space at a size similar to that of a phonebook that also have a low speed fan for quietness, making them ideal for crowded environments.