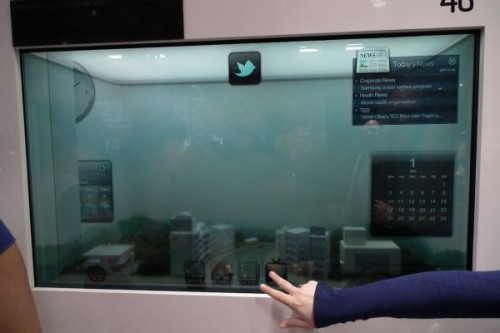 You’ve read that right, Samsung has once again made another first by being the first ones in mass producing transparent LCD panels that won’t need that much power for backlighting. For this offer, Samsung has bundled a 22-inch screen having a maximum resolution of 1680×1050 and having a contrast ratio of 500:1, well it is transparent. We might first see these pieces used in advertising and teleconferencing purposes but will eventually seep in to consumer electronics. They’re also suggesting that we’ll see these in HDMI and USB monitors but this won’t come cheap. Full press release below.

“Transparent displays will have a wide range of use in all industry areas as an efficient tool for delivering information and communication. With the world’s first mass production of the transparent LCD panel, Samsung Electronics plans to lead the global transparent LCD market by developing various applications.”
The panels come in two types, the black-and-white type and the color type, and they have a contrast ratio of 500:1 with WSXGA+ (1680*1050) resolution.

Compared with the conventional LCD panels that use back light unit (BLU) and have 5% transparency, Samsung’s transparent LCD panel boasts the world’s best transparency rate of over 20% for the black-and-white type and over 15% for the color type.

Transparent display panels have endless possibilities as an advertising tool, which can be applied to show windows and outdoor billboards or used in showcase events. Corporations and schools can also adopt the panel as an interactive communication device, which enables information to be displayed more effectively.