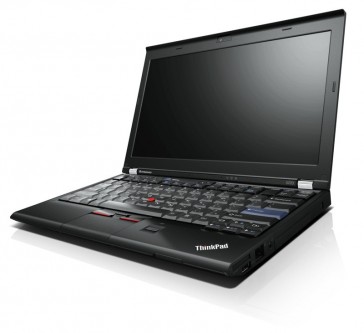 Yup, they’re now official. We’ve been teased with product images prior and now, we have the real deal. The X220 has a 12.5 inch IPS display capable of up to 1366×768 and can have an i3, i5 or i7 Sandy Core processors upgradable up to 8GB DDR3 RAM. Other options include SSDs from 80 to 160 GB worth and USB 3.0 inclusion. There’s also a webcam that captures 720p with digital microphones and a new feature, they now feature a buttonless trackpad named the “ClickPad”. At this point, we haven’t forgotten the deal with the 24-hour battery life. The story here is that the included batteries can last up to 15 hours of use, but include a ThinkPad battery pack (costing at $179) and you’ve got the magic 1 day battery life.

Then there’s the X220T convertible tablet. Although it doesn’t have the 24-hour battery the laptop variation has, it still runs a good 16 hours with the battery pack. The touch screen is also made of Gorilla Glass for those tough tablet action. Both units are slated for an April release with the X220 priced at $899 while the X220T starts at $1,199.

RESEARCH TRIANGLE PARK, NC – March 8, 2011: Lenovo announced today the next generation of the best-selling ultraportable laptop of 20101 – the ThinkPad X220 laptop – and the X220 convertible Tablet PC. These PCs give mobile business professionals the full performance and usability found in larger laptops, but in a super ultraportable design. The PCs run up to 75 percent faster than ultraportable competitors that use low-powered CPUs2, feature smart PC technologies for incredibly long battery life up to 24 hours3 on the ThinkPad X220 and sport a clean, revamped design with hinge-based latching and a giant touchpad in a thinner laptop design. Additionally, they feature improved durability with wider drain-holes in the spill resistant keyboard and a 50% improvement in drop test performance4.

24 hour Battery Life for Around the Clock Computing
The ThinkPad X220 offers up to 15 hours battery life with a standard 9-cell battery. Battery life jumps up to 24-hours by adding the new ThinkPad external battery. The convertible tablet starts under four pounds with its standard 4-cell battery. When combined with a 6-cell battery and the external battery pack, the tablet can run for 16 hours continuously on one charge. Users charge the PCs on the external ThinkPad Battery when connected to the PC or separately. A battery charge indicator shows when the battery reaches a full charge.

Full-Performance Under Three Pounds
These speed-optimized PCs fit the same full-powered CPUs as bigger 14 and 15-inch laptops for full performance5, while similar weight competitors offer only low powered CPUs. Lenovo Enhanced Experience 2.0 primes the PCs for rapid boot, shut down and resume from sleep by tuning the BIOS and other hardware settings. With Intel™ HD integrated graphics the PCs perform twice as quickly in streaming video, editing photos and loading web pages. Additionally, USB 3.0 technology on select models transfers data lightning fast, up to 10 times that of USB 2.0.

The PCs also keep corridor warriors connected longer with Lenovo’s new Instant Resume function. This function maintains connections during sleep mode for up to 99 minutes, eliminating the need to login and reconnect between meetings. And tablet users don’t have to worry about losing their pen with the new “never-lost-pen” technology. It notifies a person when he or she moves the tablet without the pen in the pen-holder.

ThinkPad Remodels with Clean, Sharp & Durable Design
The inside of the new PCs reveal a cleaner, sharper design over previous models. Both the ThinkPad X220 laptop and X220 Tablet feature a 12.5-inch HD screen and self-closing hinges that shut the PCs. This space-saving hinge design brings several key benefits: better antenna and speaker placement for stronger thoroughput, a 45 percent larger touchpad and a cleaner visual design. The larger, buttonless touchpad gives extra room for fingers to scroll, highlight and do multitouch gestures.

For students, mobile sales forces and other mobile professionals working outside, the multitouch tablet now adds a new rough and tough feature to its super bright, 300-nit screen with scratch-resistant Gorilla Glass. Already military specifications tested to meet extreme conditions, Gorilla Glass strengthens the screen so it can withstand scratches, scrapes and abuse from the field.

Ready for Business
The PCs are also business-ready: They’re easy for IT administrators to use and manage thanks to their second generation Intel™ Core® and Core® vPro processors. Common ThinkPad docking stations and batteries also allow companies to swap hardware among employees to maximize their resources and minimize cost.

Pricing and Availability6
The ThinkPad X220 laptop and X220 Tablet will be available starting in April through business partners and www.lenovo.com. Prices for models start at approximately $899 and $1,199, respectively.