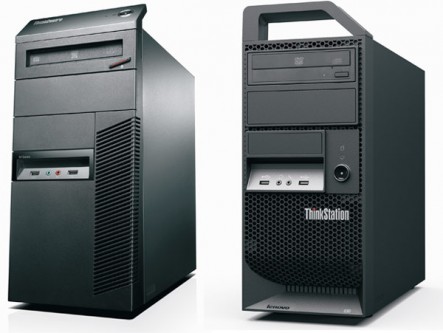 Forget about the aesthetics, these two machines are all about processing power to your heart’s content. If you want to have that office computing experience like no other, then Lenovo’s got your back through the new ThinkStation E30 and ThinkCentre M81. For starters, both are equipped with Intel’s Sandy Bridge cores. You can have the E30 with either an 80 GB or 160 GB SSD, it also has an NVIDIA Quatro / NVS graphics, RAM reaching to 16 GB and expansion options through USB 3.0 and SATA III interfaces. Meanwhile, the M81 will more or less be the same except that it uses an on-board Intel graphics for video. The E30 will cost $629 for all it’s got while the M81 is tagged at $599, both of which are to arrive in late April or early May.

The ThinkStation E30 workstation builds on its predecessor, the E20 which was named Editor’s Choice by PC Magazine for entry-level workstations in 2010. It offers choices of 2nd generation Intel® Core™ processor technology with up to four cores for super fast computing when including an Intel® Xeon™ processor. Both the ThinkStation E30 workstation and ThinkCentre M81 desktop can take advantage of Intel® Turbo Boost™ technology to overclock on performance-laden tasks. Only Lenovo machines can stay in Turbo Boost+ mode longer for greater performance due to specific proprietary thermal engineering enhancements.

In addition to traditional hard drive storage, the ThinkStation E30 workstation offers choices of 80 or 160 GB SSD for snappy performance opening, rendering and saving/closing files. For creating and consuming 2D and 3D content, the powerful workstation offers choices of NVIDIA Quadro or NVS graphics. The workstation features SATA III for twice as fast and USB 3.0 for 10 times faster data transfer speeds compared to SATA II and USB 2.0. And with up to 16 GB of 1333 mHz Error Correcting Code memory, memory-related failures are virtually eliminated.

Both the ThinkStation E30 workstation and ThinkCentre M81 desktop are optimized for fast start up and shut down time under Lenovo’s Enhanced Experience (EE) 2.0 for Windows 7 program. EE 2.0 features 20 second on average faster boot up than a typical Windows 7 computer1 thanks to Lenovo’s RapidBoot technology which uses a range of proprietary optimization techniques. The ThinkStation E30 workstation logs a 57 percent faster boot time and 38 percent faster shut down time over previous models, while the ThinkCentre M81 desktop starts up 30 percent faster.

Both machines are loaded with extra features for a productive computing experience. The ThinkStation E30 workstation carries certifications from leading independent software vendors in engineering, digital content creation and financial markets, including AutoCad, SolidEdge, Adobe and SolidWorks, along with support for Red Hat Linux. The ThinkStation E30 workstation also offers an optional Blu-ray player as well as features nine USB ports for connecting to external hard drives and other peripherals. Both machines also come with a DVD burner/player and address office place security by including port disablement and Lenovo’s Hardware Password Manager to manage encrypted hard drives.

The ThinkStation E30 workstation will be available starting in May and late April for the ThinkCentre M81 desktop through business partners and www.lenovo.com. Pricing for models starts at approximately $629 and $599, respectively.