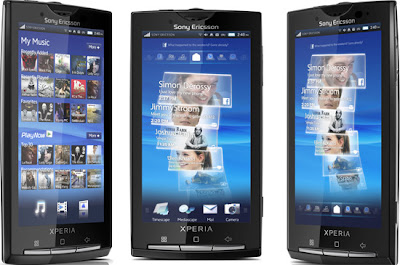 Sony Ericsson has managed to fall some way behind in the smart phone market. They have not the same sort of share in the smart phone market as they did a decade ago with their impressive mobile handsets.
This is down to one thing really and that is average phones. They have not, as yet, been able to produce handsets that have had the same response from both the public and from critics as handsets such as the Samsung Galaxy S, the iPhone or the HTC Desire but the Japanese/Swedish electronics giant are hoping that this will change soon as at the end of 2010, the Sony Ericsson Xperia X10 was released to much expectation. Time will tell if 2011 can be Sony Ericsson’s year…
In terms of looks the X10 is nothing new, it has a similar minimalist style, few buttons and the front of the mobile phone completely dominated by the large touch screen, which several other phones on the market also boast. The phone does have an angular quality that I happen to quite like though so for those interested in looks this is not too bad.
Away from the aesthetics, the phone has two features which Sony Ericsson has been lauding of late and these are Timescape and Mediascape. The former gives you a place in which things such as texts, email and tweets, photos and songs can be found and scrolled through with great ease and it looks great.
Mediascape gives you an easy way into your music, video and photos and also displays your online photo albums from services such as Picasa and Facebook and although it isn’t quite as flash and trendy as timescape it is far more useful.
There are some great things about this phone, some of the tweaks made to the Android OS are great even if others don’t look so good. The Camera is decent as is the phones looks and if you buy the phone you will be purchasing a decent piece of hardware.
If you’re looking for a great deal on the latest mobile phones, then check out www.phones4u.co.uk now!