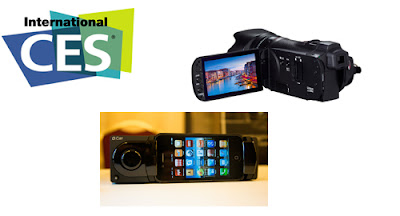 This is all about CES 2011, so it’s only fitting that we have 11 installments of this best picks series. To cap things off, we’ll show you how to utilize your iPhone for the nth time to pimp your ride. Also, Canon would try to justify the concept of having bigger pixels, as most people concern themselves with more pixels, so bigger means fewer. How will that affect our 1080p’s? Find out after the cut. 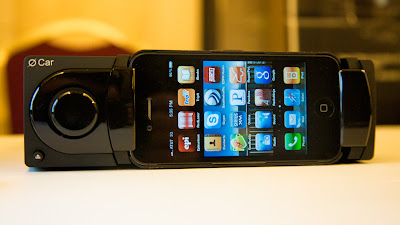 You have a car, you have an iPhone but you don’t have a car stereo? Solution? Just buy one, or you could get one of Oxygen Audio’s O’Car decks and you can have your iPhone as your car stereo. Regardless of what version of the iPhone you have, just plug it into the mount and you have instant audio for your auto. The perks? Well you can get internet radio, GPS, handsfree calls through Bluetooth, videos and of course — your favorite apps. As well as your music library.
The deck also has the typical AM/FM/RDS radio receiver. You can have the mount orient the iPhone to whatever you choose. The deck is priced at $349 and is coming sometime in spring. Can’t wait, then you can get the European version this month for $299, except that it won’t include the AM radio.
Conserving Pixels?
Canon’s new HD CMOS Pro sensor

As to why you would want to do that is totally beyond us, but Canon has provided us with a possible reason to do so. Typical sensors, those large ones like 10 megapixels and beyond, have most of its pixels wasted when shooting in full HD. With that mindset, Canon has produced their new HD CMOS Pro sensor to have only 2 megapixels.
Advantages of having larger pixels include better shots in low-light conditions as well as a better dynamic range. If you want to try this new sensor, Canon has this installed in their HF G10 consumer camcorder. Priced at $1500, it has an 8-blade iris, a 32GB internal storage with dual-slot SXDC recording capabilities and a touchscreen with 922,000 dots at 3.5-inches.
One nifty feature is that its microphone would try to adjust itself based on the camera zoom, trying to bring in consistent audio levels depending on the zoom.

New Advanced Technologies and Features:
Canon HD CMOS Pro Image Sensor: A new 1/3-inch native 1920 x 1080 sensor which delivers professional-level HD video performance. Unlike image sensors found in other consumer camcorders, Canon HD CMOS Pro uses fewer pixels, which are significantly larger (61 percent) and more sensitive, resulting in high video resolution, outstanding low-light performance, and expanded dynamic rangei:
Video resolution of 900 horizontal and 800 vertical TV lines, for Full HD video with professional precision
A 25 percent improvement in low-light sensitivity with a minimum illumination rating of 1.5 Lux, Canon’s lowest Lux rating to date in a consumer HD camcorderii
A 280 percent improvement in dynamic range for exceptional reproduction of both highlights and shadowsiii
Dual SDXC-compatible Card Slots: Each new model in Canon’s 2011 VIXIA lineup includes two card slots which ensure that users always have multiple sources of memory and allow for super-high capacity storage that expands as the capacity of SDXC memory cards increases.
High-Quality Microphone: Canon has enhanced the internal microphones on its 2011 VIXIA models to give users the high-quality sound to match their HD video. With four directional options, users can set internal microphones to Monaural, Normal (Stereo), Wide, and new Synced with Zooming mode. When in Synced with Zooming mode, the microphone will adjust directionality to coincide with the lens’s focal length position to properly match the audio with the portion of the scene being captured. Users can also adjust frequency response characteristics to dampen the effect of unwanted noise.
Tele Macro: Reduces the minimum focusing distance at the telephoto end of the zoom range to 1.3 feet (from 3 feet) allowing users to capture spectacular close-ups at full telephoto with the appearance of a shallow depth of field for stunning imagery. This is one of 38 scenes available in Canon’s Smart Auto mode.
Cinema-Look Filters: Nine different built-in cinema filters – Cinema Standard, Cool, Dramatic B&W, Dream, Memory, Nostalgic, Old Movie, Sepia, Vivid – allow users to create video with a variety of professional cinematic looks.
Story Creator: Canon’s new Story Creator assists you in the process of storyboarding an organized and sophisticated video shoot. Choose one of five themes – Travel, Kids & Pets, Party, Ceremony, and Blog – and the camcorder provides a list of suggested scenes to shoot to help walk users through the process of creating a complete video storyline.
Touch Decoration: While shooting, Touch Decoration allows users to add creative flairs to video via the Touch Panel LCD screen. Users can superimpose fun images into their video, such as animations (i.e. shooting stars or thought bubbles), freehand drawing or writing, clip art, or decorative frames.
Popular VIXIA Features:
The 2011 VIXIA line-up retains many popular features that make it easy to record outstanding HD video, such as Canon’s Smart Auto mode which intelligently detects and analyzes brightness, color, distance and movement and automatically selects the best setting for the scene being recorded. Canon’s Touch & Track feature allows users to select any subject on the Touch Panel LCD screen with their finger, the camcorder will then track the subject ensuring sharp focus and proper exposure. All 2011 VIXIA models have Relay Recording for seamless uninterrupted video recording from one memory source to the next. When the primary recording media is full the camcorder continues to record the scene by switching to the next memory source, so that users won’t miss a moment of action. Canon’s Powered IS provides a higher level of compensation for subtle hand movement at the telephoto end of the zoom range. In addition, all VIXIA camcorders with built-in memory feature HD-to-SD Downconversion which enables users to convert recorded high-definition video to standard-definition files while preserving the original HD footage. These down-converted files make it even more convenient to share video online or create a DVD. Each new model is also compatible with Eye-Fi SD Memory Cards, allowing for wireless uploading of video content to a computer, social networking site or video sharing website.

The VIXIA HF S30 includes a host of professional features such as color bars and selectable Zebra patterns, a built-in Remote Control Terminal (which supports LANC protocol), and Native 24p recording. The VIXIA HF S30 Flash Memory camcorder is scheduled to be available in March for an estimated retail price of $1,099.99.

FS series:
In addition to the new VIXIA High Definition lineup, Canon is also introducing two standard-definition models, the FS40, and FS400 Flash Memory camcorders. The Canon FS40 model records to 8GB of internal flash memory, while the FS400 records video directly to an SDXC-compatible memory card slot. Compact and lightweight (approximately 7.8 oz.), both new FS models offer 41x Advanced Zoom to help capture great video even at extreme telephoto distances, as well as Dynamic IS. In addition, the Canon FS400 will be available in three eye-catching colors, silver, red, and blue. The Canon FS40 and FS400 Flash Memory camcorders are available in February for an estimated retail price of $299.99 and $279.99 respectively.

New Optional Camcorder Accessories
The new Canon WP-V3 Waterproof Case helps protect any of the 2011 VIXIA HF M-series Flash Memory camcorders in depths of water up to 130 feet, allowing users to capture exciting HD footage even underwater. The ultimate camcorder accessory for diving and snorkeling enthusiasts, this compact and lightweight housing seals the camcorder, allowing easy on-camera operation and control. The Canon WP-V3 Waterproof Case will be available in February for an estimated retail price of $599.00.

Also new from Canon is the WM-V1 Wireless Microphone* for recording accurate audio without cumbersome wires from up to 164 feet away, ideal for ceremonies, family events and recitals. This new WM-V1 Wireless Microphone is compatible with the new 2011 VIXIA HF G10, VIXIA HF M-series, and VIXIA HF R-series camcorders and will be available in May for an estimated retail price of $250.00.