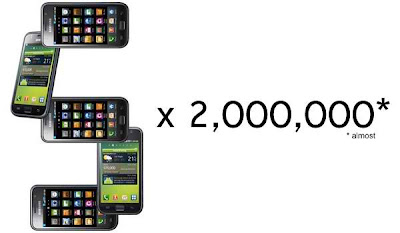 sales was really the number we’re looking at compared to Microsoft’s 1.5 million Windows Phone 7 units sold on retailers and operators. The good news here is that Samsung is almost on its targeted 10 million sales from its announced goal two months ago for its Android-loving superphone.
The Koreans also supported the Galaxy S for it successful sales, where the South Korea takes two million of the smartphone over iPhone 4’s 1.8 million sales. It’s still 2 weeks away before we end this year, as timed for holidays no wonder they might surpass the 10M mark, ooh, did we say congratulations! Now we see what’s 39 percent Android share analysts are talking about, yes, that Android may rule the world.

If you’re looking for a great deal on the new Samsung Galaxy S then read more information online at Phones4u.co.uk where they have a range of great packages on this handset.