Skip to content
TechGeeze > Lockheed Martin’s K-MAX unmanned helicopter green-lit by the US Navy for $45.8 million
It may not be the robots we’d love to see roam around but at the moment, this is a close step to attaining that, somehow. Military hardware manufacturer Lockheed Martin is now given the go signal by the US Navy to create an unmanned helicopter. The project is called K-MAX and the company’s now working on a budget of $45.8 million.
To be specific, the K-MAX is designed to be for battlefield cargo resupply missions. Now what does that mean? Quoting Lockheed Martin Aviation Systems vice president Dan Spoor:

Basically, it’s for bringing supplies to the soldiers engaged — and to minimize the cost of lives for that purpose.

Given that it’s military tech, not much is disclosed but what we know is that it could carry cargo weighing 4,000 lbs at 10,000 ft. of flight and 6,000 lbs at sea level. It’s also employing a primary rotor design that allows the emission of a tail rotor. As for the manufacturing contract, they’re to make two units of the unmanned choppers and three remote ground stations.

“K-MAX is the optimal choice for an affordable unmanned cargo delivery capability. With reduced operational and logistics costs, increased fuel savings and less manpower required compared to a ground vehicle convoy or manned helicopter, the K-MAX is the lowest-risk solution for the mission.” 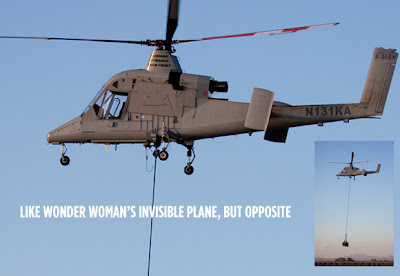