Skip to content
TechGeeze > Android 2.3 Gingerbread and all the details & excitement 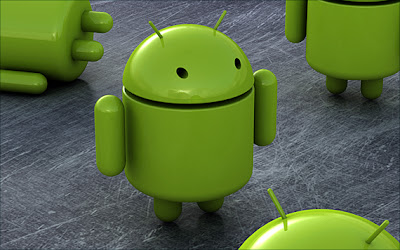 The android logo is actually passable as a gingerbread if you think (and look) about it.
Continuing on the Nexus S official release, another key point they mentioned is the fact that the handset is one of the first ones that come with the latest version of Android — Gingerbread. And with all excitement that comes with it release, many would ask how it differs from Froyo. To answer that and some other questions, here’s an overview of what comes when you upgrade to Gingerbread.
First and foremost, let’s see what changed aesthetically. For the UI, Gingerbread didn’t differ much from Froyo, you’ll get more of the “android green” colors with touches of black and orange. New inclusions to the notifications bar allow faster access to the options, downloads manager and the task manager.
A significant improvement comes from its revamped keyboard. For one, it looks better than its previous iteration. As for the overall functionality, the new layout has the individual keys spaced better, allowing easier ways to hit the keys. And with multitouch key-chording included, you’ll definitely key-in those words faster. Copying and pasting is also made easier along the likes of the iPhone with its cursor selection.
One feature that would most likely dismay carriers and eventually cause them to remove from their releases with Gingerbread is the support for VoIP calls to SIP addresses.
Performance-wise, applications run faster through an upgrade to the Dalvik VM layer that’s used to execute the apps, minimizing hangups and pauses. In essence, it gives a faster response.

The plaform now handles touch and keyboard events faster and more efficiently, minimizing CPU utilization during event distribution. The changes improve responsiveness for all applications, but especially benefit games that use touch events in combination with 3D graphics or other CPU-intensive operations.

So you might be thinking that all these upgrades will take a toll in its power management. Then think again, Gingerbread is utilizing power by performing application management in the background, saving power as well as speeding the performance at the same time.
Despite some of features probably to be omitted by the mobile carriers, upgrading to Gingerbread is a must so the wait’s all worth it.