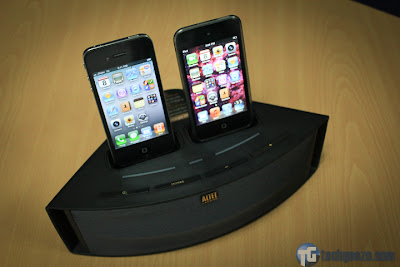 “Who do you duo with?”
Introduction
Last time we had an Altec Lansing product, we got pretty disappointed of how it fared. So what’s with another review of one of their offerings? Well, we said last time that this brand is known for producing good sound systems. We also said that they do a great job in their iPod/iPhone/iPad docks and speakers. Thus, we’ll try to solidify (or not) this claim by having this review of their M202 Octiv Duo Dual-Dock Speaker System. And this time, we’re hoping that it delivers the punch we’ve come to know Altec Lansing for. 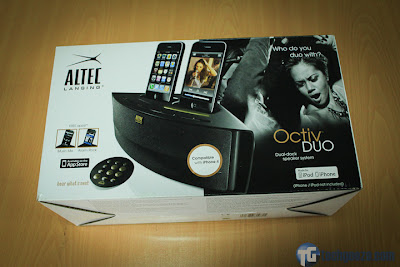 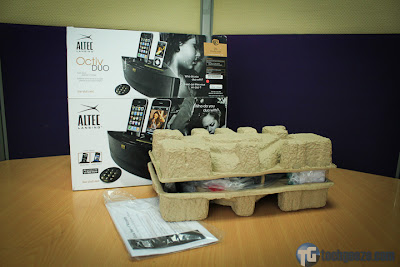 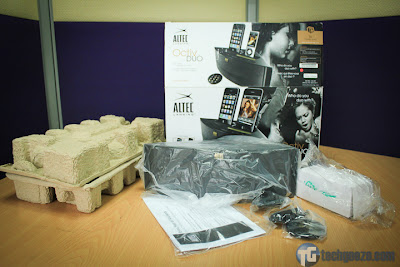 For the packaging, it comes in this box with black and gold highlights that their packaging is known for. Upon opening the box, we’re presented with two egg tray-like halves that securely holds the product. Inside the tray are the speakers themselves and some accessories. But before we delve into that, let’s see some specifications and features. 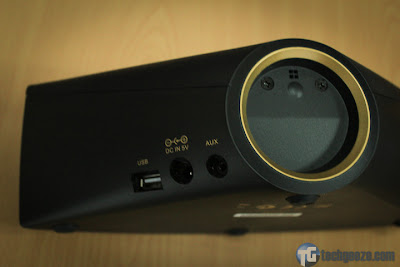 Yes, the connectors are there, alright?
Contents & Accessories 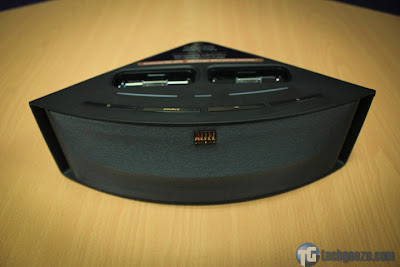 When to take everything included out of their protective packaging, here’s what you got. First is the speaker-dock unit itself, at around a tad short of a foot in length and weighing 2.5 pounds, this unit is pretty small but that doesn’t say anything about it’s sound capabilities. We’ll get to that in the main review. The main unit is shaped in a conical fashion, allowing a highly-directional spread of sound. Design-wise, it’s a simple black conic with highlights of gold like the earlier-reviewed Muzx Ultra. 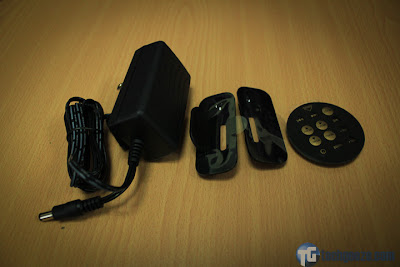 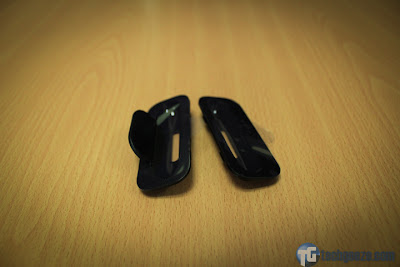 Aside from the speakers itself, it comes with some accessories. First and foremost is the all important AC power cable, that’s a no-brainer. Second are two “dock covers” that are optional to use. But once you connect them, it gives support to the devices that you’ll be attaching to the dock itself, giving the dock connectors less stress especially when you’re connecting that large ones (i.e. iPods/iPhones). 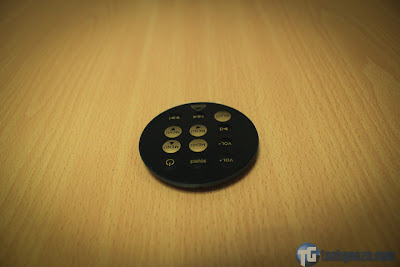 Finally is this small disk-shaped remote control unit, still in the black-gold color scheme. It contains 12 buttons that allow basic control of the dock, as well as the portable players connected to it. As to why this remote is shaped as such, you’ll find out in the following section.
Review 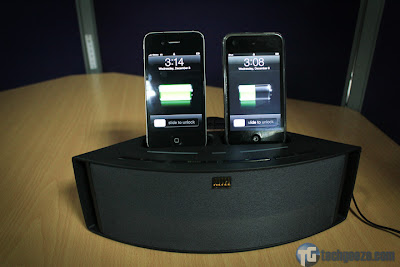 Yes, their clocks are not in sync. Any problems?
So we’ll immediately get off the bat here. Don’t let the small size fool you as this “little” device gives great sounds. And the best way to test that is though the playback of various genres of music. From R&B to Pop to Alternative to Hard Rock, it delivers the necessary bass sounds to the highs without any significant hiccups whatsoever. So for the sound quality, we have no questions here.
Here’s the main selling point of this dock, as it won’t be called “Duo” for nothing. As seen in the image above, you can connect two compatible devices with it. With the four buttons in this dock — “Power”, “Source”, “+”. “-” — with the latter two being volume controls, the “Source” button allows you to toggle between devices. So if you wanted to play music from one iPod, you can select that one and choose the other if you’re getting tired of listening to those songs from that iPod. You can do that by pushing the source button in both the dock or the remote control. Three light indicators determine which device is selected. There’s one beside each dock connector and there’s a smaller one in between. This 3rd light indicates that neither of the devices are in use and the dock is mainly used for chargine. 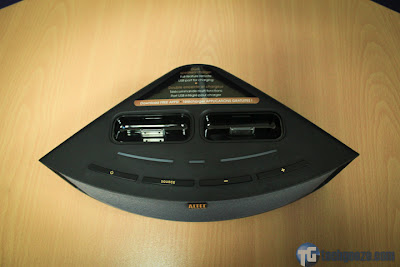 Now there’s your duo.
In line with the “duo” moniker, there’s one more nifty thing they’ve included in the package. Available are two apps that you can readily install in your iPod (provided that you have iOS 3.1 or higher). First is an alarm clock app that allows you to use the speakers as a means of waking you up. Although in order to use it, you must run the application in foreground while you’re sleeping otherwise, it won’t work. Second, in conjunction with the dual-dock capability,  is an application called “Music Mix“. What this does is it enables you to control how much music is played from one device and how much is played from the other. 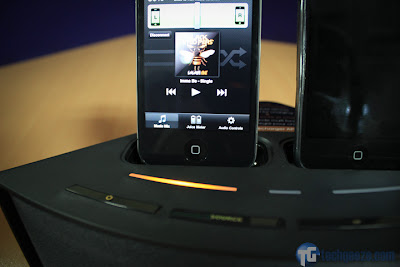 The application interface provides a simple slider that determines how much is played from one device with respect to the other. The higher the percentage, the more music is shuffled from that device to the speaker dock. This gives you more control on who’s music will come out more. Aside from that, it can also show the battery charge percentage of each device. Nothing that fancy but useful information nonetheless.
Let’s get back to that disk-shaped remote control. Why is it shaped as such? It’s due to this. 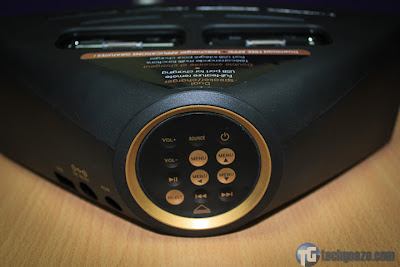 If you’ll look at one image above, you’ll notice that there’s a gaping space in that circular area at the back “tip” of the speaker unit. This is because that remote is made to fit into that area for storage, as well as aesthetic purposes. That’s one less remote lurking in your living room area.

As a bonus, although the Octiv Duo has been clearly tagged as “Made for iPod/iPhone”, we tested it with a new iPod Nano 6th Gen to see if we could see any problems in using it (as it specifies that it’s compatible up to the 5th Gen). Once we plugged it in, the little music player worked, although not all the buttons in the remote control respond, it can still play things in the new Nano. No problems there.

One more plus to this dock, even though it’s explicitly stated that it’s made for iPods/iPhones, you could still use it for other music players provided that they have USB ports (we’re pretty sure they have one)  or auxiliary connectors. You could use your non-Apple devices by connecting them to the USB port at the back. Much more, you could even plug in your walkmans or discmans to the AUX port, also at the back. This provides more flexibility to the dock overall. 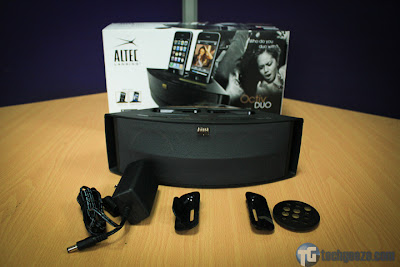 It all comes to down to one question. But before that, to answer what was raised in the introduction part. The Octiv Duo definitely didn’t disappoint unlike the Muzx Ultra, proving two things. First, they definitely know how to make their speaker docks and should just improve on them. And second, they should do a lot more of it on their earphones. To answer the other important question, is it worth the price tag? For the original price of around $100 (as it’s pretty discounted at Amazon nowadays), you’re getting a pretty small package. But the important deal here is that you’ll be getting technically two docks for the price of one. And with the addition of the Music Mix app, you’re really getting your money’s worth here. All in all, we’re recommending this, especially at the lower price it is now, for the holidays.

Check out Amazon.com listing: Altec Lansing Octiv Duo for only $74.94