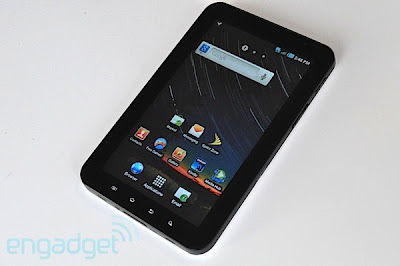 After much hoopla since its days in the rumor mill in May until its official announcement, many have looked forward in getting their hands with this practically enlarged version of their Galaxy S

smartphone. Samsung‘s got one hefty tablet here, running Android and all with the purpose of gaining more shares in the market primarily dominated by Apple’s iPad. Did it do what it’s supposed to? Let’s find out.
Let’s look at the form factor first. If there’s anything common with these tablets, you cannot go wrong by saying that they look the same more often than not (especially when looking from behind). For details, it has four buttons on the front, your standard headphone jacks and micro SD card slot… but no micro USB cable. To transfer files, you’d have to use their own cable. But if we’re talking about form factor, it boils down to how comfortable you are holding it. And the Galaxy Tab doesn’t disappoint with it’s 7.4×4.7×0.47-inch dimensions, you could easily wrap your hands onto it.
For the display, the one thing that it didn’t carry from the Galaxy S was its Super AMOLED screen. It employs a 1024×600 capacitive touch screen and it perfectly compensates to any viewing angles. So regardless of how you hold it, you’re sure that you’ll be reading what you should. As for its response, again just like the Galaxy S, it’s highly responsive.
Now, we all know that it runs on Android with an overlay of their TouchWiz 3.0 in all it’s cartoony glory. However, the main concern here is that “Android isn’t ready for tablets” and that the Galaxy Tab might have the same OS as with the Galaxy S, only larger… literally. As far as we’re concerned, as long as it works as it should be, no issues here.
For the applications themselves, there are lots of room for improvements, especially with the bigger screen that the tablet provides. For more details on the notable apps, just click the link we’ll provide later.
Another “staple” for tablets these days is the on-board cameras both in front and at the back. That’s one aspect that they have advantage over the iPad. Although the rear one only has 3-megapixels with LED flash, not to shabby but it gets the job done. As for the video capabilities, it allows recording at 720×480 — no HDs here.
Overall, the performance of the Galaxy Tab is great, very responsive despite having multiple applications running at once. All thanks to its 1GHz ARM Cortex A8 processor and 512MB of RAM. Video playback is smooth, and even YouTube videos at high definition play great. So with all these activities, how does the battery fare? You can last half a day of surfing and reading with the 3G on and you still got 20% remaining. Although the main flaw is that you can’t just plug it to your USB and it will charge. You’d still need that proprietary cable.
So all in all, we think that if we’ll be talking about Android tablets, it’s the best one out there. And it will be a noteworthy competition to Apple’s iPad. From the form factor to the applications, it works. Although on the Android front, there’s still lots of room for improvement as the mobile OS isn’t yet designed for tablet use. Looks like the Galaxy Tab has a long way to go. For a full review, the great guys at Engadget have one.
…
Oh and by the way, as with the other reviews, someone has already dissected the Galaxy Tab here’s a video of the dissection process.