Skip to content
TechGeeze > The Nokia N8 vs. iPhone 4 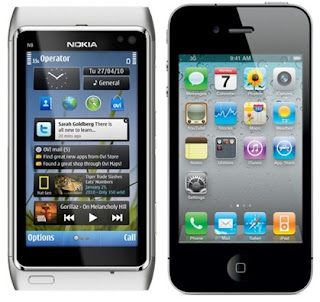 Nokia’s newest mobile phone, the N8, is providing some stiff competition in the market for Apple’s iPhone 4. Both phones are the pinnacle model of each mobile phone producer’s line. Comparing both phones on different aspects can perhaps provide some insight into which mobile phone might be better for some consumers than others.
The shape of the Nokia N8 has been streamlined in the new design. It comes with a touchscreen and is featured in a rainbow of colours including white, grey, blue, green and orange. Overall, the N8 weighs in at 135 grams and measures 12.9 mm thick. On the other hand, the iPhone 4 touts its thin profile in comparison to most other smartphones including the N8. However, the iPhone does come in a more limited range of colours; only black and white. The iPhone is slightly heavier weighing in at 137 grams with a thinner profile measuring online 9.3 mm thick.
Another feature to consider when comparing the N8 and iPhone 4 is the camera that is built in the phone. The Nokia N8’s camera takes photos with an unheard of resolution of 12 megapixels for a camera phone. This is much more than the iPhone 4’s 5 megapixel photos. Not to mention the N8’s camera also boasts a wide angle Carl Zeiss lens. Both phones do come with video editing software installed on the phone. This makes it easy to share both photos and video from both the N8 and iPhone 4.
Both phones feature touchscreen displays that measure 3.5 inches. The N8 comes with a high resolution screen that pleases many users. With its resolution of 640 by 360 pixels it is slightly less than the iPhone which has a resolution of 960 by 640 pixels. While numerically this appears to be perhaps a significant difference, some users argue that it doesn’t make a major impact on the appearance of images using the two phones. Steve Jobs has spoken frequently about the revolutionary Retina Display that comes with the iPhone. Some favour the iPhone for this reason but others again report the difference between the two phones doesn’t appear to be too significant.
Compare the top new handsets online today at Phones4U.co.uk and find the mobile phone that best suits your needs.