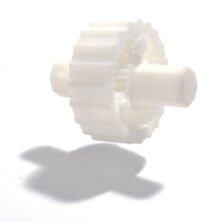 The term “3D” has been easily tossed around these days, mainly in the entertainment industry where virtually every movie shown is “better viewed” in digital 3D (even if honestly, it doesn’t warrant being shown in one). With this, the technology scene has also adapted, bringing in gadgets, television sets and other visual equipment like let’s say shades, to cash in to this fad. But this time around, let’s focus in something different, but still warrants that 3D moniker. For the longest time, it has been stereotyped that 3D Printing, the capability to generate (or literally print) actual models for purposes, limited by then, to engineering and architectural purposes. As with other break through technologies, people were mostly limited to what is available during their times and at this current day and age, 3D printing in the marketing scene is something that isn’t so far fetched compared to primitive yet effective postcards and flyers marketing as we know.
As mentioned earlier, 3D printing was used back then as a means of prototyping new products. So in essence, it’s first use in marketing was to show pre-production prototype demos of to-be-released products of various companies. The only major hiccup back then was that equipment used to be able to “print” these stuff is relatively expensive — which prevented its widespread use. But as with other technologies these days, it gets cheaper with time.
Also, creating the models themselves through a PC has been easier these days. With tools such as Autodesk’s Autocad

being in the market for the longest time, people can now create their own frames and models of items they wanted to be rendered in 3D and they print it once they’re done.
If we’ll be strictly talking about marketing here, then the same rules apply as those with pamphlets and brochures. Companies can take advantage this relatively new approach to marketing by having giveaways of these prototype products. Basically the practice will be the same, only the medium will be different. So what limits the companies to employ such methods? You’ve guessed it — costs. If you think about it, why generate such as expensive-to-produce demonstration prototype to be given away if you can convey the same message with traditional giveaways?
Well, if you think about it, there will come a time when 3D printing will be available at the consumer level as much as normal printers are. As such, the first industry to benefit from this technology adaptation process will be the toy and hobby industry as people themselves can make their own plastic models of whatever they wanted to create. From model cars, to trains, to robots and to even Legos

, you name it, they’ll create it. At one point, model-making companies may sell files instead of actual plastic sprues that the people themselves can print.

So, is it a worth while gamble for the adversiting industry to jump on the gun on the whole 3D printing revolution compared to usual printing like colour laser printing? Well, it may not be applicable to all but certain industries will definitely benefit from this new form of marketing. Although you can’t expect all people to create 3D designs themselves now, in the future, things may be easier. And once the cost of creating these renders really become cheap, it’s only a matter of time before another wave of “3D” is upon us.