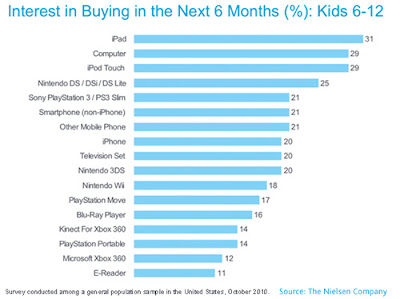 over let’s say a PC or even a PS3! That’s right folks, based on a recent list released by Nielsen today, 31% of the aforementioned demographic wanted iPads – unexpectedly beating the likes of game consoles and mobile phones. Sony’s PlayStation 3

fared 5th at 21% while the Nintendo Wii

performed at 18%, 11 in the ranking. Results for the 13 and above bracket after the cut. 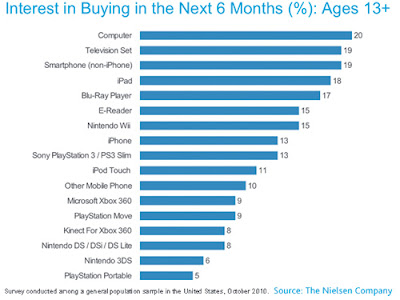 (Click to enlarge)
On the other hand, those in the upper demographic wanted the more conventional gadgets like PCs, TVs and smartphones. Personal Computers topped the list at 20% — iPads on the other hand got 4th at 18%. Surprisingly, the iPhone got a share of 13%, under the likes of a Nintendo Wii or a Blu-ray player. The question now is, how will the gaming console manufacturers react as the kids slowly bring their attention to Apple’s tablet?