With Steve Jobs dropping everything in his rant concerning the competition yesterday, which included his very opinionated view on the 7-inch tablet market, it is to be expected that there will be some form of retaliation from the other side of the fence. And sure enough, one of the primary targets of Jobs’ rants – RIM and their business model – won’t let it pass by. RIM co-CEO Jim Balsillie has released an official statement regarding this. His counterattack and more after the break.

“For those of us who live outside of Apple’s distortion field, we know that 7-inch tablets will actually be a big portion of the market and we know that Adobe Flash support actually matters to customers who want a real web experience. We also know that while Apple’s attempt to control the ecosystem and maintain a closed platform may be good for Apple, developers want more options and customers want to fully access the overwhelming majority of web sites that use Flash. We think many customers are getting tired of being told what to think by Apple. And by the way, RIM has achieved record shipments for five consecutive quarters and recently shared guidance of 13.8 – 14.4 million BlackBerry smartphones for the current quarter. Apple’s preference to compare its September-ending quarter with RIM’s August-ending quarter doesn’t tell the whole story because it doesn’t take into account that industry demand in September is typically stronger than summer months, nor does it explain why Apple only shipped 8.4 million devices in its prior quarter and whether Apple’s Q4 results were padded by unfulfilled Q3 customer demand and channel orders. As usual, whether the subject is antennas, Flash or shipments, there is more to the story and sooner or later, even people inside the distortion field will begin to resent being told half a story.”

Aside from RIM, Jobs also targeted Google and it’s Android mobile platform and sure enough, Andy Rubin (a.k.a. Father of Android) has something to say about it. He twitted:

Now, assuming this is the real Andy Rubin, what he’s trying to say here is that it is quite easy for anyone to download and compile android builds.
Finally, Steve took a shot to those developers of applications for Android, saying that it is a challenge to develop for multiple builds in multiple devices. However, the guys from TweetDeck (in which Jobs called as “TwitterDeck”) begged to completely differ as there are only 2 guys in development of the Android application. 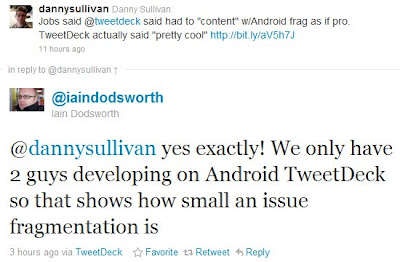 From the looks of things, this continuous exchange will last for a while, so sit back and enjoy!