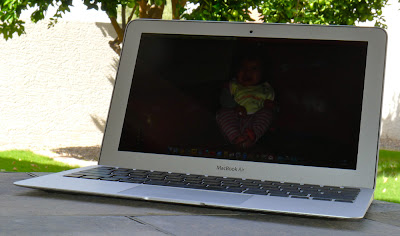 has been up there in terms of style and design. It’s not perfect but it’s innovative in every sense of the word. With the first model being as thin as normal laptops wouldn’t although sacrificing on the power aspect. And with Apple releasing another update to this coveted device, some may have their eyebrows raised or some may applaud in sheer awesomeness. Here are some thoughts regarding the new MacBook Air.

If you’re not sure as to how this model differs from the previous releases, please refer to the table below. 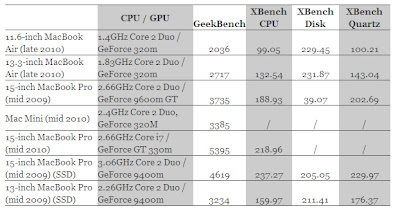 (Click to enlarge)
First and foremost, the hardware seems to have been upped a notch with it’s more solid feel overall. That’s both for the standard 13-inch model and it’s little brother, the 11-inch model. A noticeable difference aside from the thinner aesthetics is the simplified track pad with the omission of the single button it had before.
As for what’s underneath, we mentioned earlier that they’re not really the most powerful ones out there but you should know that if you’ll be getting one of these. The 13.3-inch model has a 1.86 GHz Intel Core 2 Duo processor, 2GB RAM and 128GB SSD. The 11-inch on the other hand has a slower 1.4GHz Intel Core 2 Duo chip at 2GB RAM and 64GB SSD — clearly not for the hardcore users out there.
Attachments still include the mandatory USB ports (2 for the larger model), your MagSafe connector, an SD card slot (but not for the 11-inch model) and a Mini Display port. There’s also no ethernet ports available so either you always go wireless or get Apple’s adapter.
Performance wise, you can use the table above for comparison with the previous ones. While they’re clearly not for the really tech-savvy, the casual, stylish techie would surely have fun with its simplicity and ease of use — plus the ever-so-marketable portability which the Air is known for. So overall, they’re really very mouth-watering in terms of gadgetry, with the design, finish and the lower price tag, especially with the smaller model  For an in-depth review of both models, the great guys at Engadget has a review that can really help you decide in getting one of these.